When It Comes To Protecting Privacy, Some VPN Apps Are More Virtual Than Others 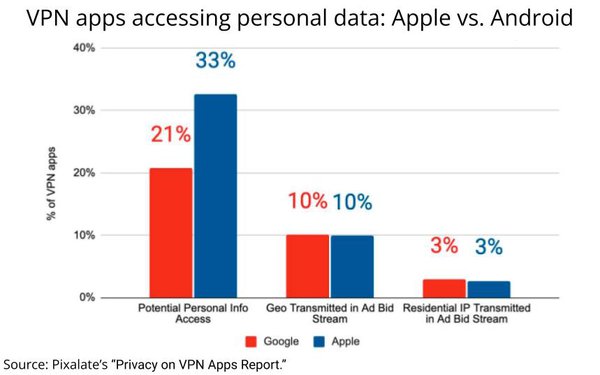 While Apple’s privacy framework -- especially its app tracking transparency updates -- has been one of the big mobile stories on Madison Avenue the past couple of years, there are a wide variety of other technological steps being taken by consumers to keep their identities private from others, including marketers.

But a new report finds that one of the most popular means -- virtual private network (VPN) apps -- ironically may actually be targeting users, transmitting their location data, etc.

There currently are more than 7,800 VPN apps on Apple’s and Google’s app stores, according to the new report from Pixalate, and 10% of them actually transmit their users’ location in the advertising bid stream so they can be targeted programmatically by advertisers.

Even more ironically, Apple iPhone users utilizing the VPN apps are much more likely than Android users to have their personal data accessed.