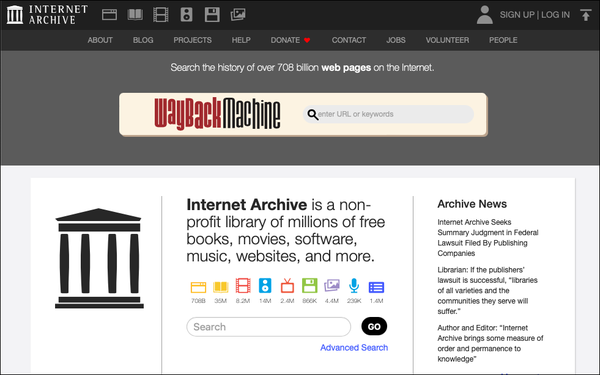 Major book publishers are pressing a judge to rule that an 11-year-old digital lending program established by the nonprofit Internet Archive infringes copyright.

But the Internet Archive counters that its digital lending program doesn't infringe copyright, arguing the initiative is protected by fair use principles.

“The Internet Archive and the hundreds of libraries and archives that support it are not pirates or thieves,” the nonprofit, represented by the digital rights organization Electronic Frontier Foundation, argues in papers filed late last week. “They are librarians, striving to serve their patrons online just as they have done for centuries in the brick-and-mortar world.”

The arguments come in a dispute dating to June of 2020, when the publishers sued the Internet Archive for lending digital books over the web.

Since 2011, the Internet Archive has been lending e-books through its “controlled lending program,” which involves loaning one digital copy at a time for each hard copy that's been scanned and digitized.

In March of 2020, when libraries shuttered in response to the COVID-19 pandemic, the Internet Archive launched a “National Emergency Library,” which offered downloads of the same scanned hard copy to multiple users at once. That program ceased in June of 2020.

The publishers sued over both initiatives, arguing that copyright principles don't allow the Internet Archive to copy and distribute digital book files.

The Internet Archive argues that both programs -- the original lending library and emergency initiative -- are protected by fair use.

The original program is “fundamentally the same as traditional library lending,” but offers “a better way of getting the book to the one patron who borrowed it,” the nonprofit contends.

The nonprofit adds that the digital lending program “serves the public interest by increasing access to and dissemination of knowledge, without harming the commercial interests of the publisher.”

The Internet Archive also says the emergency program was a fair use, given the circumstances.

“The ability of copyright law to incentivize the creation of new works will be profoundly undermined if Internet Archive devalues books further by continuing its mission to put bootleg copies of every book it can acquire on the website,” the publishers contend.

They add that the Internet Archives' lending program “collapses the boundaries between physical books and ebooks.”

“Ebooks are a fundamentally different product from physical books,” the publishers write, adding that print books need to be physicall transported, occupy shelf space, and need to be replaced because they deteriorate.

“Ebooks are infinitely replicable, can last ages without degrading and can be distributed worldwide instantaneously at minimal cost,” the publishers add.

In one high-profile prior dispute involving e-books, Google defeated a lawsuit over its book digitization project, which involved scanning hard copies of books, making them searchable and then displaying snippets in response to search queries. Google, unlike the Internet Archive, didn't allow users to download entire copies of books under copyright.

The judges in that matter said Google's project was protected by fair use, given that the copying was “highly transformative” because digitizing the books made them searchable.