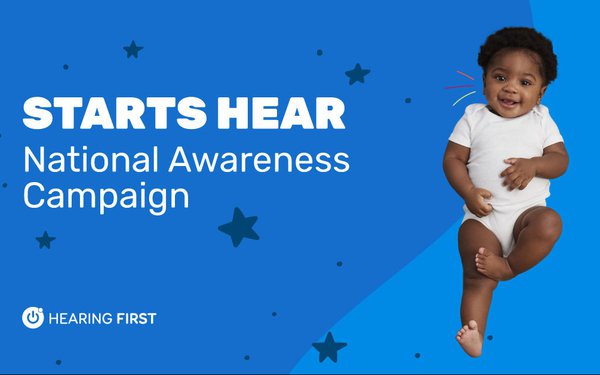 An ongoing campaign targeting expectant women about the need for newborn hearing screenings raised their awareness of the issue by 25% during its first year, reports nonprofit Hearing First.

The campaign strategy had three steps:

1. Reach expectant moms where they spend time online with a simple, actionable message;

2. Allow moms to dig deeper on the campaign website, StartsHear.org;

3. Send an email or text to remind moms to know the results of their baby’s screening and take action if needed.

The creative, designed to tap into the target audience’s dreams for their children's future, used themes ranging from astronauts to punk rock to link those hopes with the importance of newborn hearing.

For example, the astronaut ad used a photo of a baby with a drawing showing the baby in a space helmet and tether. The copy: “Mission to Mars starts hear. It all starts with hearing. Be prepared.”  Substitute in for “Mission to Mars” such lines as “Punk Rock” and “Once Upon a Time” with appropriate drawings to conjure other ads in the campaign.

Media used in the campaign included social media retargeting on Facebook, Instagram and Pinterest, ads on pregnancy websites BabyCenter and What To Expect, Google pay-per-click and banner display ads, YouTube video ads, and email and text reminders. The latter were sent out before and after baby’s due date, along with info on what to do next should newborns fail their hearing screening.

Hearing First also partnered with BabyCenter and What To Expect to create and share targeted content based on a mom’s stage of pregnancy.

Campaign messages were also spread through partnerships with such organizations as the American Academy of Audiology (AAA), Brazelton Touchpoints Center, Bright by Text, Reach Out and Read and Thirty Million Words.

A second year of the campaign is now underway, and Hearing First communications officer Christen Daniels tells Marketing Daily that very little needed to be changed.

The biggest change, she says, “was adding additional messaging during week seven post-birth to provide reminders to ensure new mom’s follow-up on their baby’s failed newborn hearing screening if necessary.”