But How Do We Decarbonize Mobile?

Kudos to GroupM for unveiling a framework to create an ad industry standard for estimating and decarbonizing the impact of media. The WPP unit put a lot of time and resources into creating an ingenious methodology for not just measuring and “offsetting” the media industry’s contribution, but actually reducing its carbon footprint, including leveraging its own clients' advertising budgets – and ideally the ad industry’s at large – to make that happen.

As the GroupM execs explained while unveiling the plan, it’s not perfect, but is good enough to begin moving the industry forward. One of its imperfections, if you ask me, is that it doesn’t explicitly address the role of mobile media. Actually, the methodology doesn’t even classify mobile as a medium, which is consistent with the way others – including myself – think about mobile devices and consumer usage to access media.

The problem is, mobile technology is increasingly the way we interact with media. It already is the dominant way the average person accesses the internet in terms of daily time spent, and it's growing fast. That’s partly because there’s so many good content options, and mobile makes it so easy to access them. But it’s also because mobile phones – and frequently the types of content they are used to access – are also incredibly addictive, and many developers and platforms create their content, apps and experiences in order to get people to spend more time on them. And that, of course, is antithetical to decarbonizing the planet.

According to carbon footprint researcher and Lancaster University professor Mike Berners-Lee, there currently are more than 7.7 billion mobile phones in use on the planet, generating a footprint of more than 480 million tons of carbon each year.

Or to break it down into simpler, humanistic terms, use your mobile phone for one hour a day and you generate 63 kilograms of carbon each year.

Use it for 195 minutes daily (the current global user average) and you generate 69 kilograms of carbon each year.

Use it for 10 hours a day, and you generate 86 kilograms each year.

So there’s an inherent paradox between the ad industry wanting to acquire people’s time and attention – increasingly via their mobile devices – and trying to have a positive impact on decarbonization.

You know, the reason app developers and platforms make such addictive content and experiences is because they actually monetize the time you spend on them – mostly by selling ads. And lord knows what the next generation of digital media experiences vis a vis immersive content, gaming, the metaverse will do to that equation?

I’m not sure how an industry – make that multiple industries – based on minting people’s time and selling it and/or selling things to them during it – can ever figure out how to put that genie back in the bottle, but I am encouraged by GroupM’s plan to begin leveraging its massive ad budgets to begin the process, including negotiating with publishers and platforms to have fewer ads on their pages (because each ad has a carbon footprint unto itself, and the more you have of them, well, you know).

I was also struck recently by similar steps revealed by Nestlé Media Lead Laure-Sarah Labrunie during a presentation at the Cannes Lions festival last month, in which she outlines ways the food marketer was taking to reduce the carbon generated by its ads, including reducing the resolution of video ads streamed and defaulting to monophonic vs. stereophonic sound -- even though those steps might be perceived as degrading the quality of the media experience.

Interestingly, Labrunie said Nestle’s A/B testing revealed no material impact on any of its KPIs by moving to lower-resolution/less carbon-generating advertising formats.

I think the same thing could be developed for time-spent with media, including ad-supported media. And  I’d like to use the occasion to coin a new concept for thinking about how to do that. 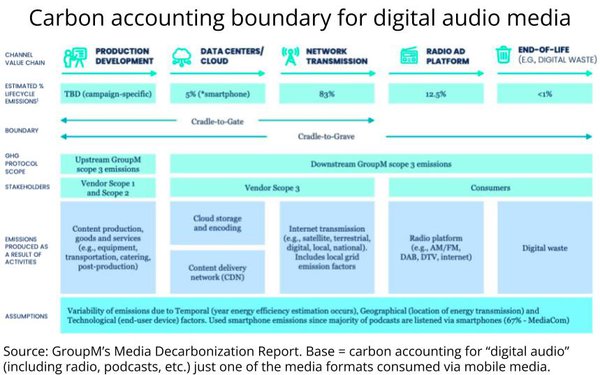