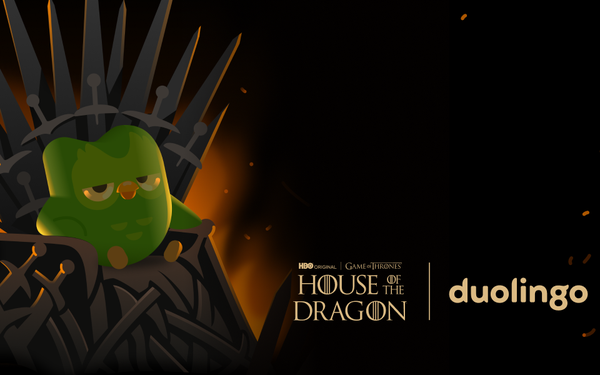 Duolingo has one word for all those impatient “Game of Thrones” fans: Lykir. That’s High Valyrian for “calm down.”

It’s offering would-be dragon lords the updated language course in partnership with HBO Max, which is set to premiere “House of the Dragon” next month. The Duolingo app is offering 150 new words of the fictional language, teaching people to string them together in 700 sentences.

The D2C company is introducing the new lessons in an extensive out-of-home campaign. Created in-house, it seats Duo the Owl, its wee mascot, on the Iron Throne.

“We wanted to build curiosity and interest in the updated course for “Game of Thrones” fans who would recognize High Valyrian, but not necessarily understand it right away,” says James Kuczynski, creative director, brand marketing at Duolingo. “So we created this series of cryptic OOH billboards that feature a phrase written in High Valyrian along with the “House of the Dragon” and Duolingo logos.”

Duolingo is the world’s leading educational app, offering lessons in everything from Navajo to Yiddish. It even offers two other constructed languages, or “conlangs”– Esperanto and Klingon, for “Star Trek” fans.

“Conlang courses generate a lot of attention for us and help attract the interest of would-be learners,” Kuczynski tells MediaPost via email. “What’s really interesting is that around 43% of Duolingo learners who study a conlang go on to study another language on our platform.”

The course will be updated, evolving as the series continues, with real-time activations supporting episodes.

The company also gifted some lucky attendees with Comic-Con “Wing of the King” pins to better imagine themselves bound for Westeros.

There’s an additional incentive to brush up on HV. HBO Max is offering fans the ability to hatch and raise dragons from its DracARys app. But those dragons only listen to commands given in High Valyrian.

Duolingo, based in Pittsburgh, worked with David Peterson, the linguist who developed the language based on “A Song of Ice and Fire” book series, by George R.R. Martin.

The company, which surged in popularity during the pandemic, isn’t losing any steam in real-life languages either. Bookings reached new records in its most recent quarterly results, reaching $102.1 million, an increase of 55% from the prior year. And it had 2.9 million paid subscribers, a jump of 60% from the comparable period.