TV Everywhere? Be Careful What You Wish For 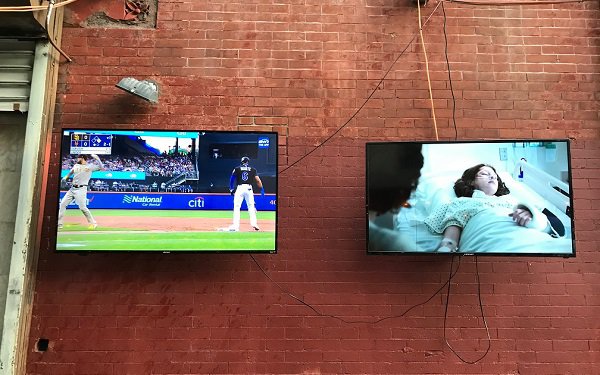 I could not believe what I was hearing when I visited a new doctor’s office the other day: It was the sound of silence.

This was a rare experience in a world saturated with TVs, including medical offices, restaurants, the back seats of taxis and even outside walls such as the exterior arrangement of TVs pictured above that was photographed a few days ago on a New York street.

It was at least as far back as the 1990s when TVs began cropping up in places where there had been none before such as airport waiting areas, the rear seats of New York City cabs and the waiting room of a hospital Intensive Care Unit I once visited where the presence of a blaring TV was particularly inappropriate.

Since then, the installation of TVs everywhere has become widespread. Before the advent of handheld devices that have made TV universally portable, the phrase “TV everywhere” meant out-of-home viewing on these TVs installed in places other than homes.

For a time, this was an obsession of TV networks and their research departments -- namely, how to measure this viewing that was going on all over the place.

TV viewing on smartphones, pads, laptops and PCs is the obsession of the networks and their researchers today.

However, having gained a foothold years before the above devices came into play, real TVs everywhere are inescapable today.

Bars I can understand. Medical waiting rooms I cannot. Bars have been a traditional venue for wall-mounted TVs since the dawn of television. Then, as now, they are used often for sports events that many patrons come to bars to enjoy.

But when the TVs are not showing the ball game, they are often tuned to TV news, both local and national.

These outlets are not exactly known for good news and happy talk. As everybody well knows, they traffic in violence -- hold-ups and assaults captured every day on neighborhood security cameras in the big cities, plus footage from war-torn, strife-worn regions around the world.

This content does not exactly scream “Cheers” in bars, or whet appetites in the dining areas of restaurants to which the bars are attached.

The photo above of TVs mounted on an exterior wall for the entertainment of diners occupying a bar/restaurant’s outdoor space is a case in point.

On one screen, a languid Mets game. On the other, a child in a hospital bed, perhaps even dying.

TVs of any kind are noisy and intrusive anywhere they appear, but especially in medical waiting areas where the sick and suffering have come to see a doctor.

When people do not feel well, the last thing they need to hear and see is a loud television with its incessant video of intersection car smash-ups and bodega robberies.

Having said all that, I have never observed anyone complain to a restaurant manager or hostess or a medical office receptionist about a TV and how it is destroying the serenity of a dining experience or rattling the nerves of an ailing patient.

Perhaps TV everywhere has become so ubiquitous that resistance is futile.