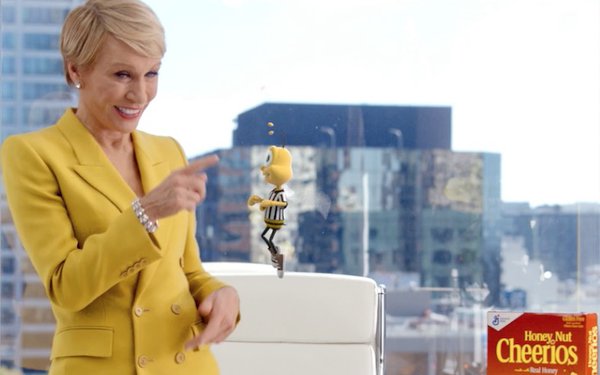 It’s the latest iteration of the “heart healthy” positioning of whole grain oats-based Cheerios as a way of lowering cholesterol to reduce the risk of heart disease.

The campaign was created by Disney’s in-house creative studio—Disney CreativeWorks—in collaboration with Cheerios, Mindshare and the Mindshare Content+team.

A star of the business reality television series “Shark Tank,” Corcoran suffered a massive stroke in 2012 and subsequently became a “survivor ambassador” for the American Heart Association.

In this spot, Coach Buzz shows Corcoran a pitch deck for an “AB-STINGER 5,000” exercise machine—only to be rebuffed when she tells him she’s “not investing in something that’s so hard to use. No deal! I need simple, I need fun.”

His fallback is to suggest that Corcoran start her day with a bowl of honey nut Cheerios and then grab a friend and go for a walk.

“You have yourself a deal! I’m in,” she responds.

For “Family Feud” host Harvey, Coach Buzz suggests he learn some new dance moves. The busy bee’s engagement with ESPN commentator Walton leads to a “trick shot challenge” in which Walton sinks a long three-pointer with one hand and his back to the basket.

According to Cheerios parent General Mills, more than 100 million Americans have some form of heart disease, and the Coach Buzz campaign “gave us an opportunity to promote an inclusive message for all ages that anyone and everyone can take care of their heart.”

Disney CreativeWorks calls the campaign an example of telling brand stories with imagination.