SoulCycle Wants You To Scrap Your Peloton 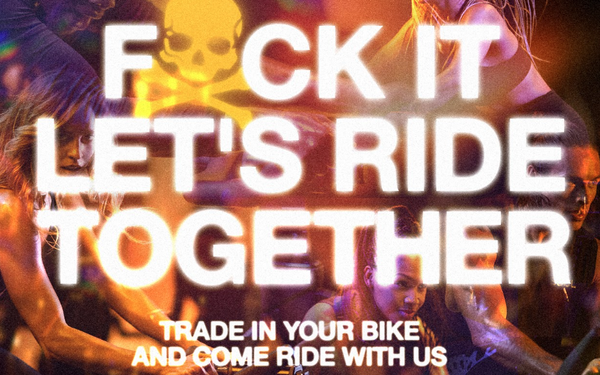 Tired of working out at home? SoulCycle certainly hopes so. Just a month after launching its "F#ck it, let's ride" campaign, it's swapping pricey in-studio classes for anyone handing in a used Peloton bike.

The effort, called "Souls Reunited," is tiny. Only the first 100 people got the deal, giving them 47 in-studio classes -- about $1,400 worth -- in exchange for their Peloton. Evelyn Webster, SoulCycle's CEO, says the company reached its 100-person goal in under an hour.

Still, the message is big. SoulCycle is hoping that for many who signed up for Peloton during the pandemic, the thrill of working at home is gone, and they're ready to get back to social exercising. So it's scrapping and recycling those surrendered Pelotons to further make its point.

Webster says the effort isn't meant to be hostile. "It's just a bit of fun," she says in an email to Marketing Daily.

"From what we've seen within our community, people are ready to get back out there, doing what they love. The last two years have been challenging for everyone, and we could all use a little more joy and human connection."

"We wanted something with some teeth," says Ray Del Savio, executive creative director of VCCP, which created the spots. In an email, he tells Marketing Daily that the effort lets the brand "go head to head with at-home bikes and even put our money where our mouth is. It's competitive and shows we're confident in the power of SoulCycle."

Since the company launched "F#ck It, Let's Ride" last month, Webster says the fitness chain has seen an increase of new riders at its 83 units. "Community engagement has been through the roof, and brand sentiment is strong."

She says the company, owned by the Equinox Group, expects to continue to expand on the expletive-laden initiative. There will be "new challenges, activations and incentives to amplify our commitment to connection, community and togetherness."

Peloton has more pressing problems than a little trash-talk from SoulCycle. Earlier this month, the company said it will stop making those bikes and other equipment, transitioning to third-party manufacturing.

With members declining and its stock-market valuation plummeting, Peloton is evolving its strategy, including expanding distribution to third-party retailers and rethinking its app. It's also continuing to test its fitness-as-a-service rental program, which combines the cost of connected fitness hardware and subscription services into one monthly fee.