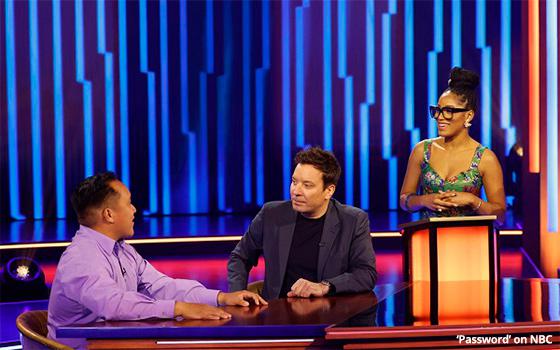 Anyone who has stumbled on the vintage game shows seen on the diginet called Buzzr cannot fail to be amazed at the low-tech feel of those old shows.

Designed for daytime hours, the old game shows of the ’60s and ’70s were quieter (except for “The Price is Right” and “Let’s a Make a Deal,” which are still on).

Studio audiences were smaller, and made no more noise than just clapping. Contestants and celebrities remained calmly in their seats. Spotlights did not sweep the studio at every correct answer.

Huge spotlights were never a part of the old “Password,” “Match Game,” “Supermarket Sweep,” “Hollywood Squares,” “Concentration” or any of the other old game shows on Buzzr.

Most of today’s TV game shows air in prime time. Episodes are an hour, not a half-hour as in days of old. Today’s game shows are gaudier and louder.

A new version of “Password” coming to NBC next week is a case in point. It is like the old “Password” (which has been revived previously about a half-dozen times), but also very different.

Fallon, host of NBC’s “Tonight Show,” is an executive producer of this new “Password.” Fallon (above photo, center) will appear in every one of the eight episodes that will be seen on NBC before the fall season starts in September. The show is hosted by actress Keke Palmer, currently starring in the hit movie "Nope" (above photo, right).

Fallon is one of two celebrities who will appear on each show. The others will not likely be seen in multiple episodes. Heidi Klum, currently a judge on “America’s Got Talent” on NBC, is the other one in the premiere.

Like the original “Password,” the new one has each celebrity teaming with a civilian to guess a secret word before the other team.

At each correct answer, the audience roars, while the winning celebrity and civilian contestants leap triumphantly from their seats to dance, hug and high-five each other as if they had just won the Mega Millions lottery.

Despite all that noise and clamor, the game itself is still fun to watch and play along with.