FX Says 'Peak TV' Continues To Peak, Projects 2022 Will Be A New Record 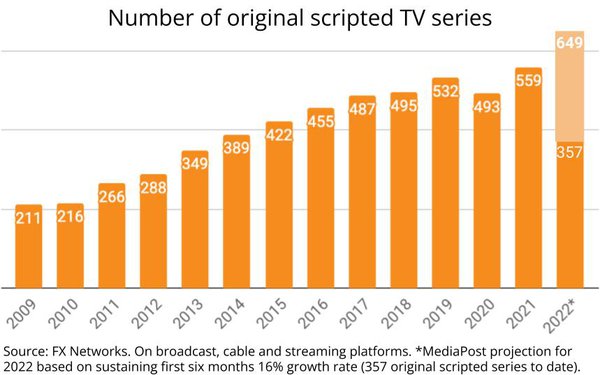 Based on its research team's analysis through the first six months, the number of original scripted series airing to date, climbed 16% to 357 on broadcast, cable and streaming platforms.

“This year we’ve seen a tidal wave of scripted programming thanks to the bottleneck of COVID delayed production finally clearing up from January 1 through the end of June,” he explained.

Landgraf did not provide a projection for calendar 2022, but if it were to sustain the first half growth rate of 16% the number of original scripted series would be 649 this year.

Landgraf previously made a similar ‘high-water’ projection, asserting that 2018 or 2019 would see the highest number, and then drop in years afterward.

“I’m going to foolishly make another prediction, which is that 2022 will be the high watermark,” he said. “My original prediction that we would see a maximum in 2018 or 2019 was obviously way way off. I think it’s obvious that this year will bring a new record.”

Since 2002, FX has been tallying original scripted TV series on all platforms and TV networks. That’s the year when FX Network launched its first original series, “The Shield."

Landgraf is credited with coining the term "Peak TV."

In recent years Landgraf has said he is worried the marketplace would be unable to support what appears to be an oversupply of original scripted programming, either by premium subscriber fees or advertising.

He said he was particularly concerned how new shows would get a share of voice in terms of on-air promotion and whether new shows would generate enough sampling from viewers to sustain all the new original series.