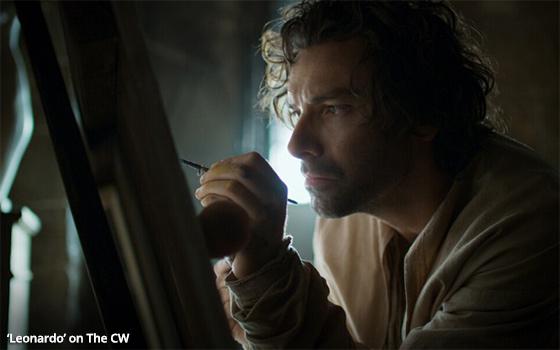 A drama series about Leonardo Da Vinci coming to The CW later this month demonstrates the pitfalls of TV trespassing into historical territory.

The series, titled “Leonardo,” was greeted with sharp criticism by historians when it premiered in the U.K. last year. At issue was its central storyline, which underpins the whole show.

Here is how a CW logline sets the stage for the first episode: “In Milan [in] 1506, Leonardo da Vinci is arrested for [fatally] poisoning Caterina da Cremona.”

According to stories about the eight-part series that were published last year in British newspapers, the show starts with this arrest, and then flashes back some years to an earlier period in da Vinci’s life.

The problem is, da Vinci was never arrested for murder, and there is little or no evidence that Caterina da Cremona ever existed, much less was poisoned by someone.

And yet, she is reportedly portrayed in “Leonardo” as the artist’s muse, and that he was in love with her.

But according to the British press, historians have no doubt that da Vinci was avowedly gay, and there is ample historical proof to back that up.

Many such historical dramas bend the truth, and sometimes even break it. Producers and writers make up events and partially fictionalize others.

Sometimes, they create new, fictional characters who are meant to stand in for two or more historical characters.

At such times, journalists can always find historians who will decry these portrayals as fake and disrespectful to their subjects.

Where “Leonardo” is concerned, some of the criticism was more derisive than usual. “Art historians, critics and biographers are apoplectic [about ‘Leonardo’], dismissing it as a ‘Monty Python version of the Renaissance’ and ‘profoundly dishonest,'” the Daily Mail reported in April 2021.

In the series, da Vinci is played by Aidan Turner, who gained international fame as the handsome, brooding Captain Poldark in the PBS “Masterpiece” hit “Poldark.”

As for “Leonardo,” the TV Blog will take another whack at it in a review closer to its premiere date -- Thursday, Aug. 16, at 8 p.m. Eastern.