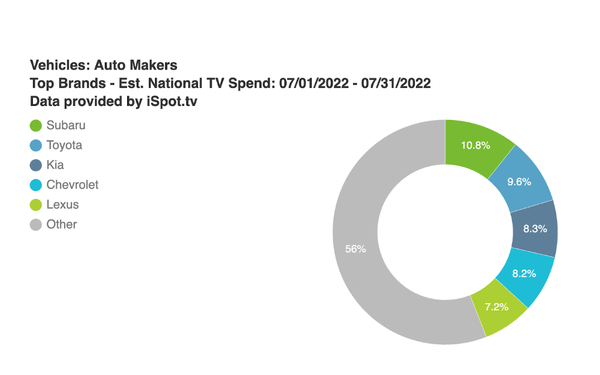 Automakers spent an estimated 41% less on national TV in July 2022 compared to a year ago, and impressions for the month were also down 4.2%, per iSpot.tv.

Without the Olympics, NBA Finals and Stanley Cup (which all took place during at least part of July last year), TV ad spending was down for automakers like Toyota and others that sponsor major sporting events.

Instead of sports, many automakers bought TV ad impressions around “comfort food’” viewing like syndicated dramas and sitcoms as they prepare to introduce new 2023 vehicle models and corresponding creatives in the fall, says Stuart Schwartzapfel, senior vice president, media partnerships at iSpot.tv.

“At the same time, local TV ad impressions jumped to their highest levels all year, at 25.3% in July, with brands honing in on specific markets to move what’s left of 2022 inventory,” Schwartzapfel says.

Buick’s climb was fueled by syndicated programming, which accounted for nearly 75% of the brand’s TV ad spend on the month.

Genesis was No. 20 this July at over $946K after not appearing on national TV at all last July.

Syndicated programs were popular sources of TV ad impressions across the board for automotive brands, taking up five of the top 10 spots (by share of impressions in July).

While golf and baseball appear high on the list, sports programming accounts for a much smaller portion of total impressions than a typical month.