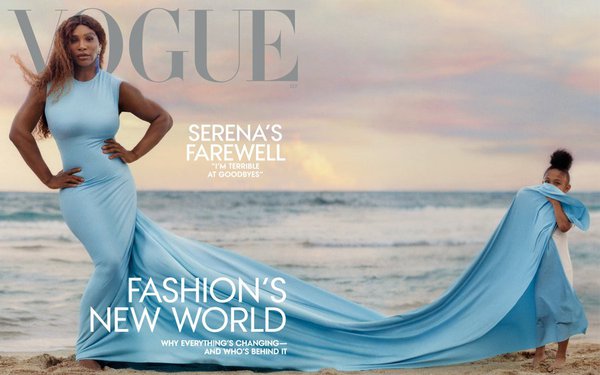 In an emotional letter in the new Vogue, Serena Williams says that while she is terrible at goodbyes, it’s time for her to move on. After the U.S. Open later this month, she’ll leave tennis.

The letter is full of Williams’ fierce honesty, highlighting the challenges of women athletes and her commitment to helping women achieve more.

She and her husband, Alexis Ohanian, want another baby. Little Olympia, 5, is pining for a little sister. And as Williams approaches her 41st birthday, that clock is winding down.

While she won the 2017 Australian Open while pregnant (though few people knew), she’s not willing to do that again. “I need to be two feet into tennis or two feet out,” she writes. “If I have to choose between building my tennis résumé and building my family, I choose the latter.”

And she explains why she’s been transitioning to her next role as a venture capitalist. After learning that women get less than 2% of venture investments several years ago, she began to understand that “someone who looks like me needs to start writing the big checks.”

Sportskeeda recently reported that Williams is well on her way to becoming the first female billionaire athlete. That’s due, in part, to her winnings.

Forbes says Williams is the highest-earning woman tennis player, netting $94 million throughout her career. That’s more than double the next closest, her sister Venus, who has totted up career winnings of $42 million.

But it’s also owing to Serena’s shrewd investments in tech companies like Tonal, which makes connected fitness equipment, and Andela, a job-finding company. With Venus, she’s a minority owner of the NFL’s Miami Dolphins. She’s also an investor in boxing’s Ultimate Fighting Championship.

Forbes estimates her worth at $260 million, the wealthiest female athlete of all time. (It puts the worth of her husband, a co-founder of Reddit, at $70 million.)

Her record as an athlete-endorser is as epic as her on-court wins, at 23 Grand Slam singles titles.

She is perhaps best known as one of the biggest stars in Nike’s firmament of endorsers. She started endorsing Puma in her teens, carving out her reputation as a fashion icon. She switched to Nike in 2003. Other endorsements include Gatorade, Delta Air Lines, Pepsi, Beats by Dre, JP Morgan Chase, Bumble, IBM and Intel.