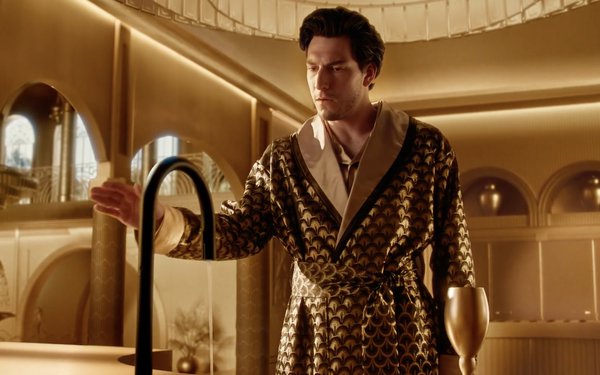 Everything King Midas touches doesn’t turn to gold, at least not in Moen’s new campaign for its new Smart Faucet with Motion Control, launched on Monday. That’s because Moen’s modern-day Midas never has to touch his faucet.

The campaign, from Havas Chicago, will run through year’s end on broadcast and connected TV, online digital and social platforms. The centerpiece is a commercial in :30, :15  and :06 lengths.

Moen’s target audience is “the millennial homeowner,” Havas assistant account executive Mikayla Murphy told Marketing Daily. “This audience sees having the latest and greatest smart home technology as a status symbol, but they don’t want to compromise on style either. They expect brands to have it all: innovative and purposeful functionality and beautiful design.

“With this in mind, the ‘King Midas’ spot was crafted to be as visually arresting as it is conceptually clever,” Murphy said.

In the spot, ‘King Midas” wakes up in his golden bedroom, where his useless smartphone has turned to gold, proceeds to picks up a just-delivered package, which turns to gold, becoming  so heavy that he drops it, and then strolls into his bathroom, where he happily just waves his hand over the faucet to get the water running. “Total control without a touch,” reads the on-screen copy.

While other faucets have motion-activated sensors and claim to be hands-free, Moen says its product is the first “first-ever totally touchless smart faucet” since the others “often require the handle [to be] left in the ‘on’ position, which can look odd and confusing to users.”

The Moen product also allows users to control temperature and the quantity of water needed through voice activation.

As a result, “now we will even sell a Smart Faucet without a handle, as you won't need it," said Mark-Hans Richer, senior vice president, chief marketing and innovation officer, Fortune Brands Water Innovations, which sells the Moen brand.

In other sink-related news on Monday, Whirlpool agreed to acquire 84-year-old InSinkErator, the world's largest manufacturer of food waste disposers and instant hot water dispensers, in an all-cash transaction for $3 billion.