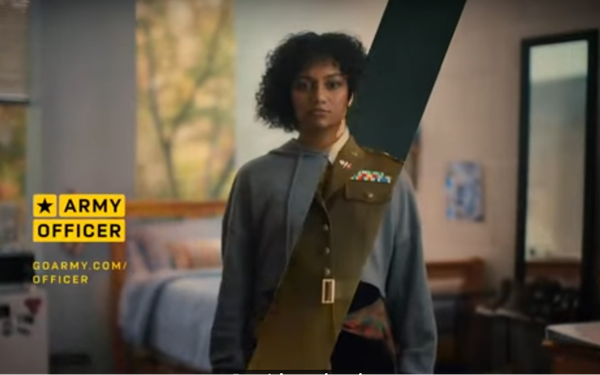 The campaign’s message is that leadership is a choice — and transformation begins with that decision. The six spots underscore the Army's competitive advantage: Unlike many industries, Army officers start their careers in leadership roles, planning and guiding missions. The ad’s closing line suggests soldiers can “skip entry level.”

“ ‘Decide to Lead’ helps address some common misperceptions about Army service by showing young people how officership can be the ultimate launch pad for the career and lifestyle they want,” said Maj. Gen. Alex Fink, Chief of Army Enterprise Marketing, the U.S. Army's national marketing and marketing research organization. “We have the training, benefits and community to prepare motivated youth to succeed and lead in any environment, they just need to make the choice.”

Officers and cadets are featured in the spots to highlight the career trajectory in an Army career. “Decide to Lead” also promotes diversity by recruiting officers who represent projected demographics of the U.S. population in 2050.

Maj. Gen. Johnny Davis, Commanding General of United States Army Cadet Command and Fort Knox, added: “It is critical that we build the force that reflects the population it serves. The Army officers we recruit today are our rising leaders of tomorrow.”

The videos will run online across social, community and entertainment platforms, including Reddit, YouTube, Spotify, Pandora, and Google, as well as through GoArmy social-media channels and GoArmy.com. Print ads and billboards will augment the work, especially in high-traffic locations, such as college campuses.

The ads are critical to the service's bottom line: In a House Armed Services Committee panel held July 19, Army leadership revealed it will be at least 7,000 soldiers short of its staffing goal at the end of the fiscal year, Sept. 30. It also anticipates it may lose up to 28,000 troops by the end of fiscal 2023, reported Army Times.