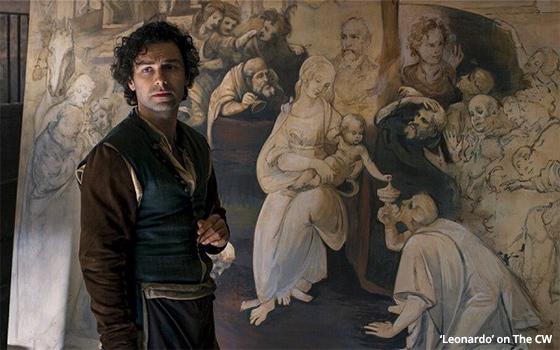 The CW’s imported “Leonardo” series is not quite a masterpiece, but neither is it the historically offensive bodice-ripper that it has been made out to be in the British press.

The TV Blog picked up some of that chatter last month and reported on the way some observers in the U.K. -- particularly renaissance and Da Vinci historians -- reacted to it when it premiered there in March 2021.

Their complaints revolved around a storytelling device that starts this scripted, “based on fact” series.

As the series begins, we see Leonardo Da Vinci (played by Aidan Turner, pictured above) being arrested for murder, accused of fatally poisoning a young woman who is positioned in the series as a muse for his artwork. Historians aver that this never happened.

Related complaints had to do with the nature of the artist’s relationship to the woman, an artist’s model named Caterina da Cremona (played by Matilda De Angelis), who is believed to have never existed in the first place.

The complainers said the series depicted the couple as unrequited lovers, with Leonardo pining for her but not quite possessing her.

In the British press stories, these experts sought to remind everyone that Da Vinci was a homosexual and, as such, would not have the feelings for this woman that the series attributes to him.

If this is what these historians thought about the show, then they likely never watched it. Throughout the first episode of the eight-episode “Leonardo,” which starts on The CW on Tuesday night, Da Vinci’s ambivalence toward women (to say the least) is made crystal clear.

While his homosexuality is hinted at, for the most part he is depicted as a loner who has difficulty forming close relationships with anyone, male or female.

As for his relationship to his muse and model, the two come across as very good friends. A gay man with a close female friend is fairly common today. Who is to say it was not possible in renaissance Italy? Leonardo and Caterina, meet Will and Grace.

The really surprising thing about “Leonardo” is its high quality and intelligence. Whether or not the series is fictional in spots, it provides a very watchable re-creation of what it life may have been like in the artists’ community of the period. It is popular history done well.

Among its best features is a surprise actor (a surprise to me, anyway) in the role of Leonardo’s much-older mentor.

He is none other than international movie star Giancarlo Giannini, now 80. His presence and performance lend gravity and credibility to the show.

Also in the series -- Freddie Highmore from “The Good Doctor” on ABC. He is not much seen in the series’ premiere, but he is the official who solemnly arrives at Leonardo’s home to arrest him.

At first glance, the youthful-looking Highmore, 30, seems like an odd choice for the role of a tough law enforcement officer in 16th-century Europe.

The same reaction occurs at second glance too, in a scene in which Highmore vows with a sneer to “see Leonardo hang.”