Competition Spurs Decline In VOD And Online Linear Consumption Per User, Per Service 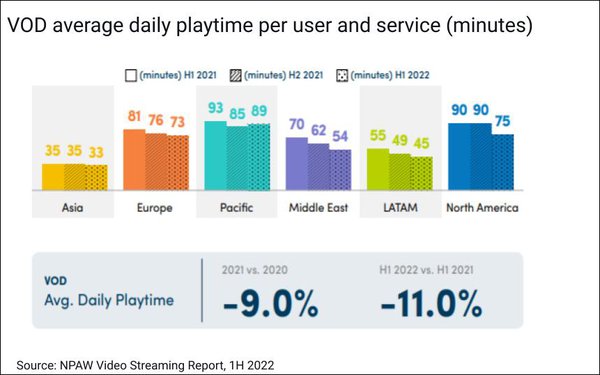 Although total playtime and number of plays continued to increase across video-on-demand (VOD) and online linear TV in this year’s first half, intensifying competition drove an accelerated decline in user engagement on the individual service level.

But there was one big exception: sports programming.

And while average number of titles consumed is declining, viewing times are increasing, pointing to consumption of longer content.

Those are the main takeaways from the latest global video streaming industry report from video analytics solutions provider NPAW, based on data extracted from its platform in 2022’s first six months.

“Attracting and retaining users is becoming increasingly challenging as competition between services and global economic uncertainty grow,” sums up NPAW CEO and Co-founder Ferran G. Vilaró. “The rise of advertising-based models and the promise of sports streaming both have the potential to deliver further industry growth, but long-term success depends on a more fundamental formula: superior content plus a superior experience.”

After three quarters of year-over-year decline — including a 9% decrease in full-year 2021 — VOD services globally saw daily playtime per user and service decline again in this year’s first half — this time by 11%. This suggests that the decline in consumption may be speeding up.

In North America, average playtime per user per service declined from 90 minutes to 75 minutes. (Chart top of page.)

Viewers also watched slightly fewer VOD titles per day than a year before. On a global level, the average was about three titles per day and service — down 4% versus the year-ago period.

The Pacific was the only region to recover first-half 2021 levels, overtaking North America as the area where users watch the most titles per day (four versus three). Asia remained the region with the lowest average. 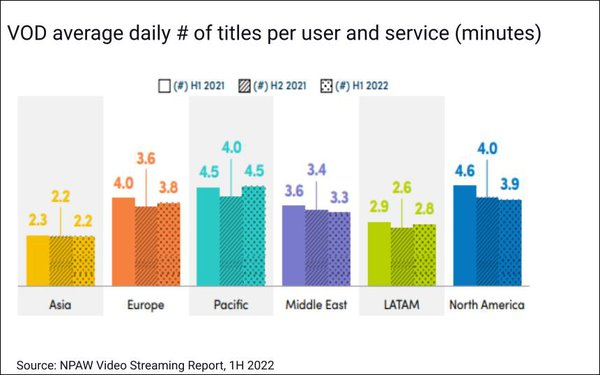 Despite the global decrease in average daily number of titles, global average media duration (average length of titles watched) has been on the upswing. In 1H 2021, it rose to 33.9 minutes — up 6% year-over-year.

North America, while logging its fourth consecutive quarter as the leading region by average media duration or title view time, saw its average decline from 41.8 minutes to 40.6 minutes.

The global average completion rate for VOD rose 2% in the first half, driven by North America and Latin America.

Average bitrate for VoD approached a peak, as providers increased average join time to control buffering. This resulted in a rise in exit before video start (EBVS), which had decreased in 2021.

Meanwhile, in online linear TV, average daily playtime per user and service, while up for full-year 2021, has been decreasing for the past three halves.

“This suggests that online linear TV providers, like VOD platforms, are feeling the effects of increased competition,” notes the report. 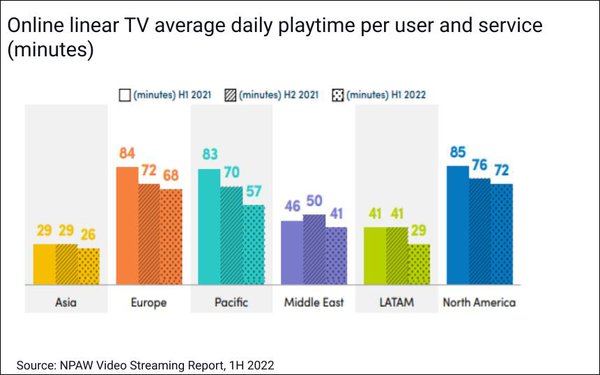 Online linear users are not only spending less time on each service; they are also watching linear content for shorter periods at a time.

After a 3% increase in full-year 2021, global average effective playtime — how long a user watches content each time they hit play — dipped slightly (by 1% YoY) in 1H 2022. For online linear TV, this metric is a good indicator of length of viewing sessions.

As for sports, in a six-month period packed with major events,