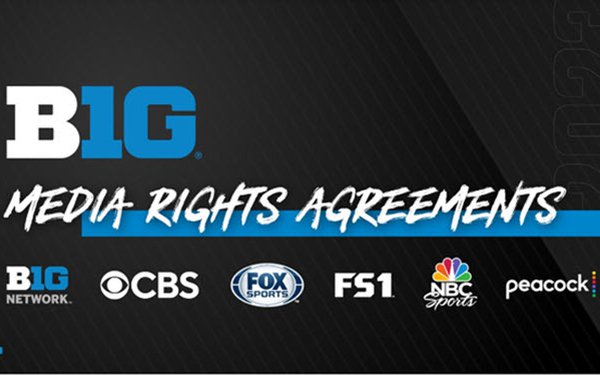 The Big Ten Conference has ended a decades-long relationship with ESPN in favor of seven-year distribution rights agreements with NBC/Peacock, CBS and Fox.

The deals, reportedly valued at more than $1 billion per year, are the largest in college sports history. The rights commence July 1 and run through the 2029-30 season.

Including its recently announced additions of USC and UCLA, the once Midwest-focused Big Ten has evolved into a national conference, driving up the value of the rights, which will be shared by all 16 member schools.

The new agreements include coverage windows (including pre-game coverage) for each of the three broadcast networks on college football Saturdays: 11 am on Fox, 2:30 pm on CBS, and prime time on NBC.

NBC will broadcast 14 to 16 games per season starting in 2023, with its coverage dubbed “Big Ten Saturday Night”— marking the first time that Big Ten football will have a dedicated weekly primetime game on a national broadcast network.

All CBS Big Ten football and basketball broadcasts will be simul-streamed on Paramount+.

Starting in 2024, CBS will televise up to 15 regular-season football games per season, including an annual Black Friday game in the afternoon.

Fox has renewed its deal to televise football and men’s basketball games each season, with the opportunity to carry additional sports throughout the year.

The Big Ten Conference’s partnership with Fox reached its high point during the 2021-22 year, as Fox captured the No. 1 time slot in college football for the first time with its Big Noon Saturday platform that featured 10-14 games involving a Big Ten team, and a men’s basketball season that ended with the top three most-watched games in the history of FS1, all featuring Big Ten programs.

The Big Ten Network — co-owned by Fox and the Big Ten — will continue to televise a full slate of football, basketball and Olympic sports throughout the year.