Alexa Takes Off For The Moon 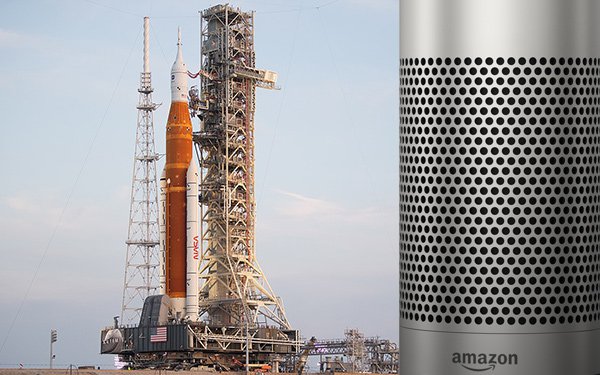 Amazon’s Alexa is going where Apple’s Siri and other digital voice assistants can’t go -- to the moon. She’ll be on board NASA’s Artemis 1, slated to launch its three-week unmanned mission on Monday morning, Aug. 29.

Alexa herself has been bragging about her flight, as users could hear by asking her to “Take me to the moon."

“For the first time in 50 years, NASA will be returning to the moon with Artemis 1,” she responds. “I’ll be on board for the journey to test out how I can make astronauts’ jobs easier and more enjoyable on future missions.”

"One of Amazon's primary goals for this project is to inspire those who want to be part of the next generation of scientists, engineers, and astronauts, no matter their background," stated Kelly Wenzel, Amazon’s director of B2B marketing and developer engagement, Alexa, in a release.

“I can imagine a future where astronauts can access information on flight status and telemetry -- such as spacecraft orientation, water supply levels or battery voltage status, through simple voice commands,” said Howard Hu, deputy Orion program manager at NASA’s Johnson Space Center, in another press release.

Alexa’s trip is part of a collaboration Amazon announced last year with Lockheed Martin and Cisco. She’s part of Callisto, a technology-demonstration payload embedded into the spacecraft that will also include Cisco’s Webex videoconferencing capabilities.

Artemis 1 is the first of several NASA missions whose goals include landing the first woman and the first person of color on the moon.

Could the first disabled astronaut be far behind?

The United Spinal Association said it would be part of a virtual crew testing Callisto, with one of its members simulating interactions between Alexa and future astronauts. “For instance,” the nonprofit stated in a press release, “participants will be able to ask Alexa to turn cabin lights on and off, or ask how fast the spacecraft is traveling.”

“We believe voice technology, including Alexa, presents many opportunities to make experiences of all kinds more accessible for people with mobility disabilities," said Rhonel Cinous, the United Spinal Association virtual crew member who also hosts “The Ramp. It. Up! Podcast.”

Rather than using the cloud as on Earth, Alexa in space will use NASA’s Deep Space Network for its communications.

Concurrent with the Artemis 1 flight, Amazon hopes to make space exploration more accessible to Alexa users, such as providing in-depth info on the voyage.

“While I'm in space, you can ask me questions and follow along to get the latest updates on the mission,” explained Alexa.

Meanwhile, in other brand-related space flight news, T-Mobile on Thursday announced an agreement with Elon Musk’s SpaceX to broadcast a new wireless network from Starlink satellites that will allow T-Mobile customers to get cell coverage on their existing smartphones “almost anywhere a customer can see the sky.”

mobile, technology, voice assisted, voice search
1 comment about "Alexa Takes Off For The Moon".
Check to receive email when comments are posted.
Next story loading