Fast Plant-Based: The State Of Veggie Meat Entrees At QSRs 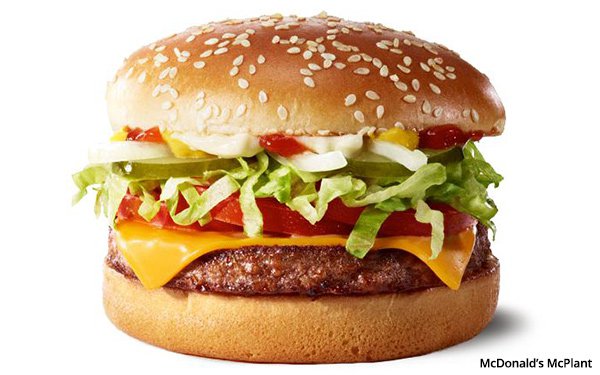 In late July, McDonald’s concluded its test of the McPlant burger, which had been made with Beyond Meat patties. McDonald’s had tested the burger in eight restaurants in the U.S. in November 2021. In February, it brought the McPlant to about 600 locations.

McDonald’s and Beyond announced a three-year partnership in early 2021. JPMorgan Chase & Co. analyst Ken Goldman, who spoke with employees at 25 McDonald’s, wrote in a research note, “Not surprisingly, the reason sometimes being cited is that the product did not sell well enough.”

As a review of the McPlant in the San Francisco Gate stated, “It was not good, nor was it bad. It was merely food.” The review continued that “the Beyond Meat-formulated concoction” was “bland and boring.”

The McPlant test doesn’t mean the end of plant-based food, even at McDonald’s, which hasn’t commented on its plans for the announced three-year partnership.

Here’s a look at how some other fast-food and fast-casual restaurants are doing with their plant-based entrees:

Starbucks: In 2020, announced it planned to become “resource-positive,” storing more carbon that it emits. Starbucks currently offers the Impossible Breakfast Sandwich, featuring Impossible Sausage. The sandwich is also served with a fried egg. “The latter tastes real, while I can’t say the same for the former,” Thrillist concluded in its review.

KFC: KFC did a trial of plant-based fried chicken with Beyond Meat in 2019 and then in 2022 went nationwide with Beyond Meat at more than 4,000 locations, but currently doesn’t feature any vegan entrees on its menu.

Subway: In 2020, Subway revealed its meatless meatball marinara would be a permanent fixture on the menu. In late 2020, Subway expanded its vegan entrees with TLC (Tastes Like Chicken), a plant-based sub.

Taco Bell – Taco Bell is working with Beyond Meat to create a new protein. The company said it will test the new protein in the coming year.

Wendy’s – In June, Wendy’s launched the Spicy Black Bean Burger. Wendy’s has dismissed McDonald’s plant-based offerings as “bland.” The burger is available in some Wendy’s locations, including Columbus, Ohio; Jacksonville, Florida; and Pittsburgh.

Burger King – Burger King just launched its Original Chik’n Sandwich, which is made with Impossible Foods.

At this moment, it appears that several fast feeders have given plant-based meat a try, but so far consumers aren’t biting.