Campaign Zeros In On Blacks, Hispanics At Risk For Prediabetes 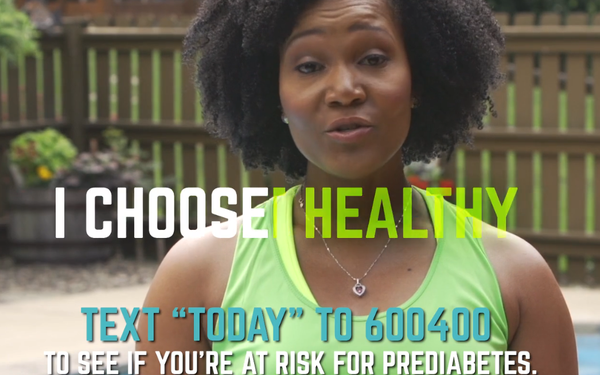 Targeting over 1 million Black and Hispanic Pennsylvanians who are at greater risk than whites to develop prediabetes, a precursor to Type 2 diabetes, the National Association of Chronic Disease Directors and the Health Promotion Council have launched a campaign titled “Make a Choice for a Healthier Life.”

All the content has the goal of getting the target audience to send a text that leads to a quiz to help them determine if they are at risk for type 2 diabetes. Those with high scores are referred to the Centers for Disease Control’s National Diabetes Prevention Program.

Texting, along with email, is also part of the targeted outreach.

“We can predict -- while maintaining consumer privacy -- who is likely to be at risk for diabetes or other health issues and reach them with the right programs, and in some cases incentives, to do something about it,” she told Marketing Daily.

“Text campaigns are especially effective for improving health equity with under-represented populations and for driving immediate action,” she continued. “Ninety percent of people respond to a text within three minutes, and 70% of consumers say they want texts from their healthcare providers.”

Virgin Pulse would seem to be an expert in this area, since Morgenstern notes that “we run hundreds of thousands of these hyper-personalized campaigns for health plans, hospital systems, and public health entities across the U.S.”

She said that previous Virgin Pulse text campaigns for diabetes prevention have resulted in average blood sugar levels going down 1.3% from 10.5% at baseline, along with improvements in medication adherence and reduced hospitalization.