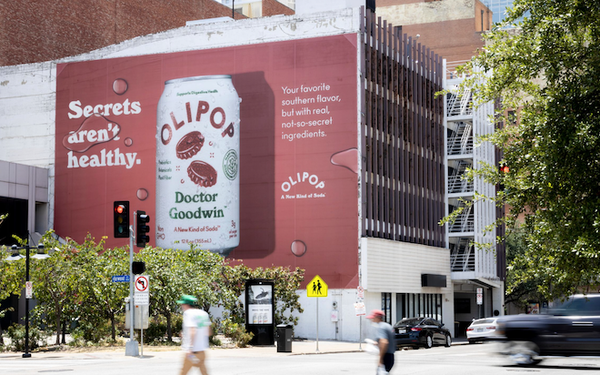 Increasingly, small CPG brands have been leaning into OOH to establish brand legitimacy while targeting key audiences by neighborhoods instead of blanketing whole cities or towns.

“You’re not talking about Pepsi or Doritos here, where you’re looking to blanket markets and go bonkers,” says Brian Rappaport, founder and CEO of New York-based Quan Media Group—which he describes as an “out-of-home concierge.”

Last month, beverage brand Olipop took over the side of a building in Dallas, Texas to introduce a new flavor that tastes like Dr Pepper—whose 1880s roots are about 80 miles away, in Waco.

The cheeky creative revealed “Your favorite southern flavor, but with real, not-so-secret ingredients” along with the statement “Secrets aren’t healthy”—both of them a nod to Dr Pepper’s longtime close-lipped stance on what’s in its flagship beverage.

In this interview, edited for brevity and clarity, Rappaport gives an overview of the Olipop campaign along with recent OOH efforts for sauce marketer Truff and hair and skincare brand Ouai.

CPG FYI: Besides its proximity to Dr Pepper’s origins, what was attractive about Dallas for the Olipop campaign?

Rappaport: Dallas is a top 10 DMA, but when you look at it from an out-of-home standpoint, you get a really large mix of tactics. You’ve got impactful, gigantic wallscapes. You can wrap trolleys, and there are large-format, digital spectaculars. We settled on downtown Dallas for its foot traffic and vehicular traffic and also from a social amplification standpoint. Olipop wanted a nice placement they could photograph and utilize on social media to help push out this flavor.

CPG FYI: What about Truff?

Rappaport: Truff was holding a contest to see who had the best deep-dish pizza in Chicago. They didn’t want to go nuts with out-of-home. It was basically “let’s have one tentpole placement,” which was a gigantic static billboard in the heart of the West Loop—the hottest area in Chicago in terms of dining and night life. We supplemented it with about 20 to 30 of what are called digital city info panels—almost like digital bus shelters. One side had a digital screen and the other a map of the Loop.

CPG FYI: What other components were there?

Rappaport: The call to action was asking who has the best deep-dish pizza, and here’s where you can vote on it with a website link. We did mobile retargeting in proximity of the ads and put a pixel on Truff’s website to understand, through anonymous mobile location data, who came into contact with any of our ads.

CPG FYI: How about Ouai?

Rappaport: That was a really fun one. The goal was to launch their first-ever brand awareness campaign. Their whole campaign was about how to pronounce Ouai and tying it to different consumers—with the tagline “doing things your Ouai.” We put this primarily in New York and Los Angeles.

CPG FYI: What were some of the tactics.

Rappaport: In Los Angeles we focused on Venice and West Hollywood, with street-level barricades, which are essentially wild postings—for example at construction sites—that  can take up entire blocks in areas of high foot traffic. Those were complemented with some large-format walls.

CPG FYI: Tell us more about the wild postings.

Rappaport: You can’t really measure wild postings. They’re legal, and every brand uses them, but you don’t get to pick exactly where you are. You move around a given neighborhood. At the end of the day, it’s a really great frequency tactic and a great way to blanket neighborhoods. But unless you use a vanity QR code or a flow code, there’s no real way to measure the effect.