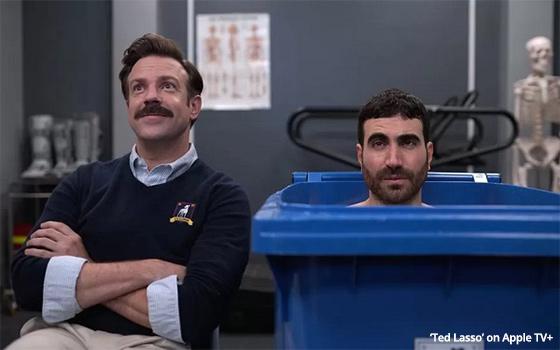 Streaming services mopped up at the Emmys Monday night, while the broadcast network that aired the show -- NBC -- won only one award.

And once again, broadcast television provided a three-hour, prime-time platform for the most talked-about TV shows in streaming and pay cable -- the content kings with which the networks compete for viewers’ time and attention.

Continuing a trend that has been building for years, network television was, for all intents and purposes, invisible at this year’s Emmys.

NBC’s one win was Outstanding Variety Sketch Series for “Saturday Night Live,” a legacy TV show if there ever was one.

Only two other Emmys went to a TV network in the entire show. They both went to ABC and its grammar-school comedy “Abbott Elementary.”

And that was it for network television, except for the fact that network TV was the very platform that was exposing its own paucity of awards for all the world to see.

By contrast, streaming series were winning Emmys all over the place. “Ted Lasso” (Apple TV+), “Succession” and “White Lotus” (both HBO/HBO Max), and “Squid Game” (Netflix) all won multiple awards.

Network TV was not even a factor in the Best Drama competition, since no network dramas were nominated in the category. As for Best Comedy, “Abbott Elementary” was the sole network entry there.

It stands to reason that the Emmy-awarded dramas and comedies from the streaming world must receive a promotional boost from this exposure on prime-time network television.

How much of a boost is a piece of data that either does not exist or is simply unavailable to the TV Blog. But how they could they not?

Well, one answer to that might be found in the abysmal audience data for the show that came out yesterday -- viewership of just 5 million people, according to Nielsen Preliminary Fast Affiliate numbers. It is the lowest audience tally in the history of the Emmys.

The numbers can mean several things. One is that fewer and fewer people care anymore who wins Emmy awards. And two, most people were probably elsewhere, watching the very shows that won all of the awards Monday night.