MyPillow Guy: Who Needs A Phone When You Own Fox News In Prime-Time 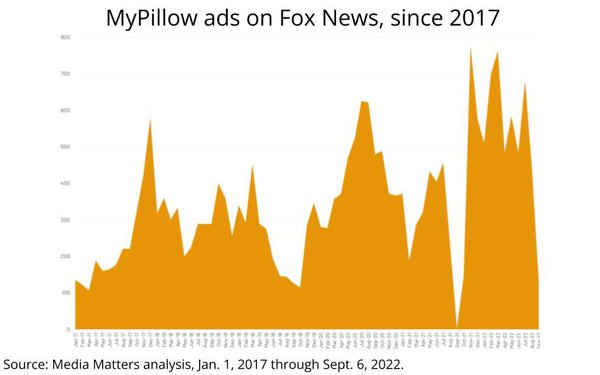 The FBI may have seized his phone as part of their investigation of an alleged breach of Colorado's voting systems, but Mike Lindell's biggest communications channel remains Fox News Channel. In fact, according to an analysis released Wednesday by watchdog group Media Matters the MyPillow advertiser and spokesperson may be the most visible figure on Fox New, especially in prime-time.

Except for a brief period in the fall of 2021, when Fox News declined to run ads promoting Lindell's "cyber symposium," MyPillow ads have been averaging hundreds monthly, and have actually spiked at their all-time high in recent months.

"Of note, Fox hosts Tucker Carlson and Laura Ingraham both bemoaned the apparent seizure of Lindell’s phone – with neither, of course, confirming any details beyond what Lindell said," a Media Matters spokesperson noted, adding: "A MyPillow ad with Lindell even aired shortly after Carlson’s segment."