New (Old) For Fall: NBC Takes 'Quantum Leap' Into The Past 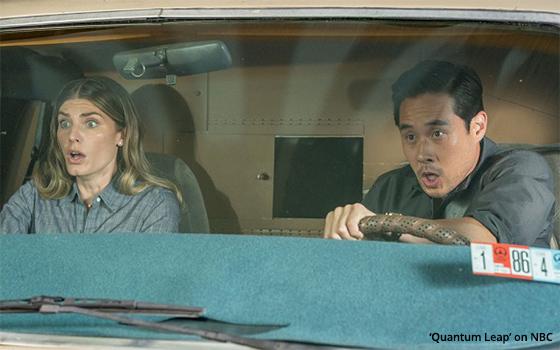 NBC is relying on a revival of a 30-year-old sci-fi show to fill the 10-11 p.m. slot on Monday nights leading in to their affiliates’ late newscasts this fall.

This effort begins today, Monday, September 19, as NBC introduces its first new show of the fall network television season -- a show that is not actually “new” at all.

Even more intriguing, the show is “Quantum Leap,” an old series about backward time-traveling -- which is the very thing NBC is doing with this revival. This is a parallel that will be lost on no one.

The old “Quantum Leap” had enough staying power to stick around for five seasons (March 1989 to May 1993).

That, of course, was in an entirely different era of television.

In the calculus of its times, the original show was a bona fide hit, with audiences generally north of 10 million viewers an episode.

In the original, Scott Bakula starred as the show’s quantum leaper, Sam Beckett, with Dean Stockwell (who died last November at age 85) as a time-traveling assistant or guide who appeared to Sam as a hologram.

The show had Beckett jumping into the quantum-leap machine before it was fully tested and approved, and as a result, he was unable to return to the present.

Instead, he time-traveled back to other times and places each week, where he occupied the bodies of strangers and in the process, found himself in situations where he could alter the fates of people he met and save their lives.

The new “Quantum Leap” travels the same route as the first one, while also making vague references to the era of Sam Beckett and his holographic friend.

In the new one, a team of geniuses still working under the top-secret supervision of the Pentagon is still trying to perfect this Quantum Leap time-traveling machine that has been in development since 1989 -- a government boondoggle if there ever was one.

And once again, the lead inventor/physicist/genius on the project decides to try out the apparatus before it has been declared safe and – voila! -- he is lost in quantum space.

There, he will suddenly beam off to some other past era each week with no apparent ability to return home. This is the situation in this situation-drama.

For the record, the new physicist is named Ben Song (played by Raymond Lee) and his holographic sidekick is named Addison (played by Caitlin Bennett). That’s them in the above photo having a rip-roaring time in a wacky car chase.

The TV Blog’s memory is unable to travel back in time to the original “Quantum Leap” to reliably contrast and compare the old one with the new one.

However, the experience of watching the premiere episode of the new “Quantum Leap” just last week is still fresh, which is unfortunate.

Hopefully, subsequent episodes will hold together a lot better than this one, which should be easy because the bar is low in Episode One.

A couple of things, in no particular order of importance: For some reason, Dr. Song’s first time-trip in the pilot takes him back to 1985 in a city that is supposed to be Philadelphia (for reasons unknown).

But it soon becomes clear that the show was filmed in L.A. Among other clues, the aforementioned car chase passes buildings that are clearly landmarks of downtown L.A. that have been seen in a thousand TV shows, movies and car commercials over the years.

In the episode, our time-traveling physicist gets wind of an elaborate plot to steal the world’s largest diamond from the Museum of Modern Art.

Well, first of all, there is no Museum of Modern Art in Philadelphia, but there is the world-famous MOMA in New York.

And yet, the caper still unfolds in a building that is supposed to be a Museum of Modern Art in Philadelphia, even though the building used for the show -- whether it is actually in Philadelphia or not -- is clearly 100-150 years old, and an odd place in which to establish an institution dedicated to modern art.

Moreover, a museum of modern art would not be a likely repository for a valuable gemstone in any case.

While these observations may seem nitpicky, they serve to illustrate that the first episode of this new “Quantum Leap” is a straight-up mess. Mixing up its cities and museums is just the tip of the iceberg.