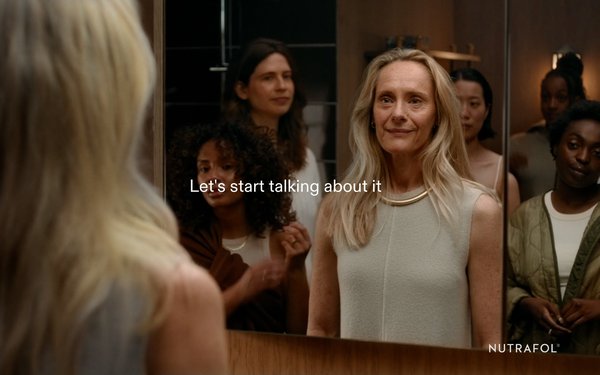 Nutrafol knows women are shy about discussing thinning hair. Recently acquired by Unilever, it's launching an awareness campaign inviting them to "Shed the Silence." So the nutritional supplement brand is tapping into a broad influencer network, including broadcaster Erin Andrews and actress Rumer Willis, to get more honest hair conversations started on social media.

D2C Insider: Walk us through the thinking behind the new ads.

Jen Nichols Armstrong: It's a way for us to reach out and speak to women about the emotional impacts of hair thinning. We know a lot of women are unprepared for their hair journeys. And when they have changes, which happens in about one out of two women in their lifetime, there is much more than the physical thing that goes on. There's real emotional impact that they just aren't ready for -- and nothing supports them.

So the goal of this campaign is simple. We're just looking to reach out and talk to those women. We want to make sure they know they are not alone and that what they're going through is normal. If they feel prepared and supported, that emotional impact hopefully takes less of a toll.

D2C Insider: There are many products to treat hair loss, almost all targeting men. Why is it so much easier for men to talk about it? Is it because, on some level, we expect men to go bald? Why the shame and stigma?

Nichols Armstrong: It's pretty hard to compare because so much comes down to what matters to you and what's valuable to you. They affect people in entirely different ways.

Hair loss seems to cut deeper for some women. Their hair is really important to them and communicates something about who they are. So when they go through this, it's not just a physical change or a journey they're going through. And some women aren't as prepared for that, or they don't know the science and what's going on behind something. So it can tend to leave some women feeling in maybe a more shameful or emotionally questioning place.

And it's not often visible. I have examples from family and friends, people that I knew deeply, that were going through this. And I had no idea -- they didn't tell me until I got this job. They say, 'I've never mentioned this. I've been too ashamed to tell anyone."

D2C Insider: And it is different than, let's say, wrinkles. We may not like them, but we do know they're inevitable. Hair loss isn't on the list, though.

Nichols Armstrong: Yes, and that just comes from not knowing it's normal. And while the hair loss and thinning rates aren't the same for men and women, they're also not wildly different. The fact is, your hair is going to change. But the expectations aren't as clear for women.

D2C Insider: The campaign includes all kinds of women in terms of age and ethnicity. But is there a more specific target or subset?

Nichols Armstrong: It is a pretty broad range. Hair issues can happen to a wide set of women for different reasons. It can be from stress to changes in hormones, diet and nutrition. There are so many factors that are a broad group. So rather than focus on a specific demo, we want to reach the ones who feel most impacted.

D2C Insider: Why are influencers important to this?

Nichols Armstrong: Hair loss is a real experience. But people feel stigmatized and alone, like they are the only person going through it. An influencer can bring their personal experience and their story. Hearing someone say, 'I've had this, I've gone through this,' helps normalize it.

Nichols Armstrong: The goal is to reach them in all aspects of life. So we're using a broad approach, with everything from TV to out of home, and taking it to the streets. Facebook and Instagram, of course, but also podcasts, which are great for storytelling.

D2C Insider: How will you judge the impact?

Nichols Armstrong: We're not seeing this as a sales tool, but as an effort to change sentiment and engagement. This is about women, the hair-loss community and how supported they feel.