Q: When Is A Medium Not A Medium? A: When It's A Line Item

One of the most important themes I’ve been hearing from GroupM over the past year has been how difficult it is becoming to define media “line items,” yet this morning it just defined one of the biggest of them all:  a $100 billion-plus new and rapidly emerging media category dubbed “retail media.”

To be fair, retail media is not new and likely is as old as, well, retail. The problem has been accurately accounting for it. And while I respect GroupM’s methods and models as well as any of Madison Avenues – or even Wall Street’s – bean counters, the biggest problem with defining media always has been “definitions.”

I won’t wax on about “dark media,” because I think I’ve already beat that concept to death, but I do think we live in a world and work in an industry where we only count – and attribute value – to what we can see, measure and add up. For the most part.

And I think GroupM’s ground-up method of analyzing advertising revenue data reported by media suppliers is about as good a method as any. The problem is it defines a media line item based on how suppliers think about them.

Ever since I began covering advertising and media in the early 1980s, I knew that a less-than-accounted for form of advertising was happening at retail, and over he years it took on many names – “co-op advertising,” FSIs, “slotting allowances,” “end-aisle displays” – etc. Back in the late 1980s, I remember my colleague Rebecca Fannin at Marketing & Media Decisions magazine publishing a story headlines “Brand Hostages,” and it was about all he ways retailers shake down brand marketers to either get distribution, or get premium positioning within heir stores, printed circulars, etc.

It was mainly about the way money changes hands, and there certainly were lots of subjective terminology used to describe it, but fundamentally the overall theme was that it was a form of paid promotion that either went direct to consumers in the form of co-op advertising or something called “consumer promotion,” or it went directly into the retailer’s pockets via something called “trade promotion.”

We can debate whether or how much of that constitutes advertising and or media, but the bottom line was a heck of a lot of money was changing hands – some might argue it was even more than what was reported as measured media advertising spending – all to get a brand in front a consumer at retail.

That stuck with me, but I don’t think I really started paying attention to the concept of “retail media” until the first incarnations of it emerged in the early 1990s, thanks largely to distribution of video monitors inside big retail outlets. Walmart TV, NBC On-Site and others all tried to scale it into a major ad-supported media category – and one that would attract budgets for “non-endemic” advertisers (ones just looking to reach people, not necessarily because their products were available to be purchased in the store) – but none of it scaled in a big way until it became “digital.”

The first wave of that had a clunky “line item” descriptor – “place-based digital media” – which ultimately morphed into “digital out-of-home media” that happened to be located in a retail location.

Meanwhile, other blurry lines were being crossed in the way consumers began using media at retail, including the ones in their pockets or hands while they were standing in a store, not to mention the ones they use on their desks or laps at home to plan their in-store shopping experience.

And well, the rest is history. Much of what was once “trade” or “consumer” promotion has morphed into a new, rapidly emerging digital medium now defined by the line time “retail media.”

And now we have a benchmark for it: $101 billion and growing fast – to as much as $500 billion depending on how you, well, define it.

So look for lots of headlines in the consumer and trade press (including the one you’re looking at here) about this rapidly growing ad medium, because we all like to watch horse races, right?

But for me, the real questions still come down to how you define things, and the data you have available to measure them once you define them.

So an even more important theme raised by GroupM’s Business Intelligence team this year isn’t the size and or trajectory of the next new one, but where it’s coming from? And how much of it is new (ie. incremental) or where it is cannibalizing from.

When I asked GroupM’s Kate Scott-Dawkins that question during the agency’s press briefing ahead of this morning’s release, she said she wasn’t sure, but would get back to me on that. I hope so, because I’d like to report on GroupM’s estimate, even if it’s just a guestimate.

And the main reason is that in an era where things get disrupted and change so fast, because of the rapid evolution of digital media, I think it’s more important than ever to have clearly defined and accurate definitions and, well, “line items.”

That’s why I’ve been so interested in tracking GroupM Business Intelligence’s own soul-searching about it.

I’ll leave you with one last GroupM anecdote to illustrate this dilemma and the way the team is thinking about it. It comes from this week's episode of the team's “This Week Next Week" podcast when they discussed news this week that YouTube paid $6 billion to license music content in the past year.

“Yeah, we just have a line item for YouTube and call it a day," Scott-Dawkins replied.

"These are the things we need to think about," Wieser concluded, adding, "I think five years from now, to this point, the line item of traditional media as we’ve broken it up isn’t going to be very relevant so we are going to have to think at the media owner level more than anything else." 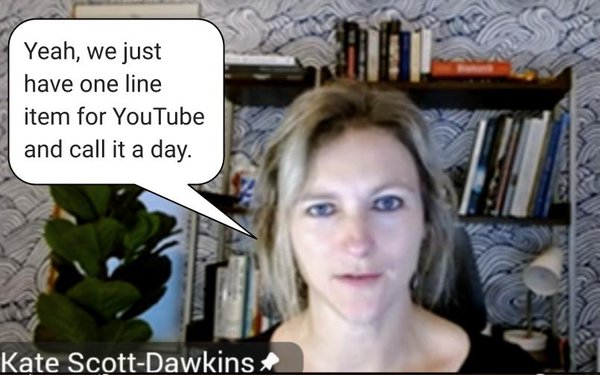 3 comments about "Q: When Is A Medium Not A Medium? A: When It's A Line Item".
Check to receive email when comments are posted.
Read more comments >
Next story loading