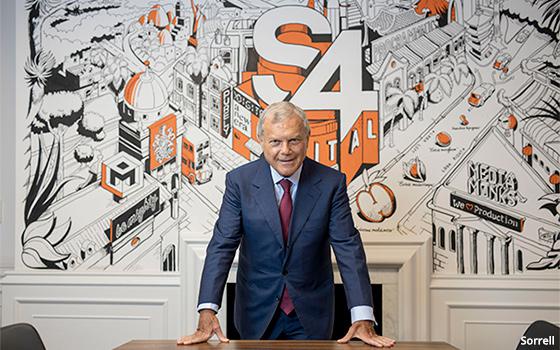 S4 Capital reported a 58% net revenue gain for the first half of the year to roughly $424.8 million with organic net revenue growth of 28%.

The company’s net loss widened to about $93 million from $26 million in the same period a year ago. The firm issued a profit warning a few weeks ago to prepare investors. The latter didn’t seem to be concerned, as S4 shares rose nearly 10% on the London Exchange Wednesday.

The company stuck to its full-year guidance of net organic revenue growth of 25%.

It added 3,350 people in the first half but has now imposed a hiring freeze, in part to better balance growth with costs.

By region organic growth was 26%, 36% and 28% in the Americas, Europe Middle East & Africa and Asia Pacific respectively.

S4 leader Martin Sorrell stated that “In the first half of 2022, we continued to invest in increased human capital ahead of further top line advances and in management infrastructure, which impacted our" earnings. "In the second half, we are focused on a better balance between top and bottom-line growth to ensure we reach our revised targets for the year.”

“Combinations remain a key part of our growth strategy,” added Sorrell, “however, for the time being we are focused on organic growth and maximizing value from our existing businesses, where momentum remains strong. While the global economy faces many significant challenges…the prospects for digital advertising and transformation remain relatively bright, while traditional media languish, and there is evidence that demand accelerates during periods of economic uncertainty as we saw with Covid in 2020, when we performed strongly.”