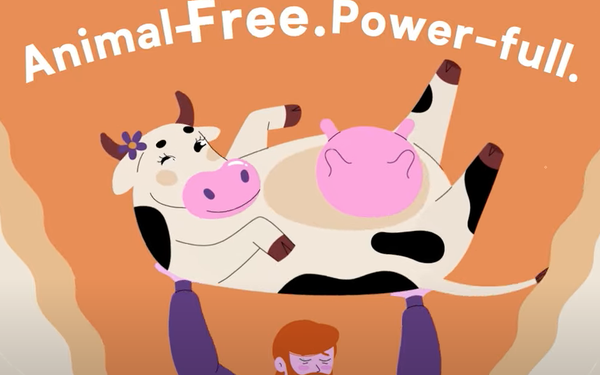 Nutrition and supplements brand Myprotein is employing animation to introduce consumers to animal- and lactose-free whey protein powder that can be mixed with liquids.

Although whey is one of the two main proteins in dairy milk, Myprotein says Whey Forward is formulated by the fermentation of microorganisms called microflora and contains no soy, hormones or sugar.

The complicated science behind the formulation process is depicted briefly in this spot from the Troup agency populated by animated characters and using a technique called flat design.

Among the product claims are “Animal-Free” and “Power-full.”

It’s a distinct departure from this previous “Fuel Your Ambition” commercial for a range of Myprotein products in which exercise is said to be not an option but a lifestyle.

“With a product launch that’s such a big deal in the space, we wanted it to stand out from the typical gym rat or people working out,” Dimmer says of the Whey Forward creative. “It’s for everybody. You don’t have to be in the gym six hours a day.”

Among Whey Forward’s attributes is that it tastes “smooth and silky, so it’s very palatable and desirable from a mouth/flavor/texture profile. It delivers the benefits that, traditionally animal-based proteins have.”

Along with water, typical mixing options could include almond milk and oat milk, according to Dimmer.

At the end of the Whey Forward spot there is a call to action in the form of keys typing the brand into a search bar and Myprotein’s URL.

Whey Forward is formulated by California-based, food-tech company Perfect Day, which creates dairy proteins via fermentation in “microbiota” as opposed to extracting them from bovine milk.