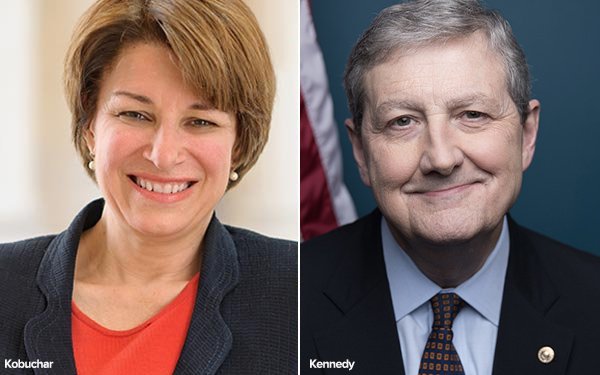 The same lawmakers who say they want to save journalism don't seem to care that much about the First Amendment.

On Thursday, the Senate Judiciary Committee voted 15-7 to advance the Journalism Competition and Preservation Act -- a bill that is supposed to help newspapers, while in actuality running roughshod over social media companies' ability to moderate content and to make fair use of online material.

The bill, introduced by Senator Amy Klobuchar (D-Minnesota), would grant smaller news outlets an antitrust exemption in order to allow them to band together to negotiate with Facebook and Google for payment for links.

The bill itself says negotiations would be for “access,” but the proposed law's framework only makes sense if access means links.

One obvious problem with this scheme is that Google and Facebook -- and every other website operator -- can already link to anything online for free. Otherwise, the web wouldn't exist.

Google and Facebook (and other sites) also can already display headlines and snippets for free. Headlines generally are not copyrightable, and snippets are protected by fair use principles -- which themselves stem from the First Amendment.

The bill also would prohibit negotiations over content moderation -- effectively preventing Google and Facebook from removing misleading or outright false stories, while also requiring the platforms to subsidize news organizations that publish such stories.

On Thursday, co-sponsor Senator John Kennedy (R-Louisiana) boasted that the statute would prevent Google and Facebook from wielding editorial control over what material to display.

He stated that the bill would “support small, local, independent and conservative news publications that struggle to survive under the weight of Big Tech’s market dominance and censorship efforts.”

Kennedy added that the measure “would cover Louisiana’s major newspapers and many conservative outlets, giving them a level playing field in negotiations with Big Tech platforms that often prevent them from making a profit from their work online or sharing their work with broader audiences.”

The industry organizations News Media Alliance and the National Organization of Broadcasters support the proposed law, while the tech industry and others -- such as advocacy group Public Knowledge, digital rights organization Electronic Frontier Foundation to online publisher Techdirt -- oppose it.

He writes: “This bill is a huge attack on editorial discretion in multiple ways. It limits the ability of websites to remove content they find problematic. It forces companies to pay for content that is literally free to link to, it effectively rewrites copyright law.”

It's not yet clear whether the House or full Senate will take up the measure before the midterms.