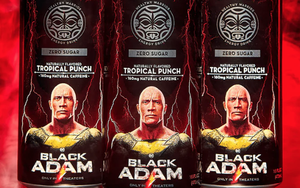 ZOA Energy co-founder Dwayne “The Rock” Johnson is appearing on the beverage brand’s cans in the form of superhero Black Adam in a tie-in with a movie of the same name.

Scanning a QR code on the limited-edition cans provides a behind-the-scenes look at the upcoming DC Comics and Warner Bros. feature film “Black Adam,” which premieres in theaters  Oct. 21.

Johnson portrays a former slave in an ancient land called Kahndaq, who wakes up in modern times after being imprisoned for 5,000 years, eventually teaming up with the Justice League to thwart DC Comics villain Sabbac.

Molson Coors Beverage Co. is hoping the film will drive awareness of ZOA energy drinks, given its investment in ZOA Energy and status as the brand’s distributor.

“It’s a huge cultural moment and a chance for us to drive awareness around ZOA and to get people to try it for the first time.”

In a contest online that runs until Nov. 15, 10 people will win a year’s worth of free movie tickets, a “Black Adam” film poster signed by Johnson, and a year’s supply of ZOA.

Launched in January 2021, ZOA is the #12 brand in energy drinks and its sales are up nearly 300% year to date, according to IRI multi-outlet and convenience store data cited by Stallman.

According to research from Clootrack, which monitors consumer opinions expressed on social media, product-review sites and other platforms, taste and flavor are far and away the biggest drivers of consumer adoption of energy drinks.

In a Clootrack analysis conducted in March through August, males represented 75% of comments regarding energy drinks.

ZOA had more positive sentiment for its energy boost qualities than its taste, according to Clootrack.