The 'Todd' Couple: Mother And Son Drive Each Other Crazy 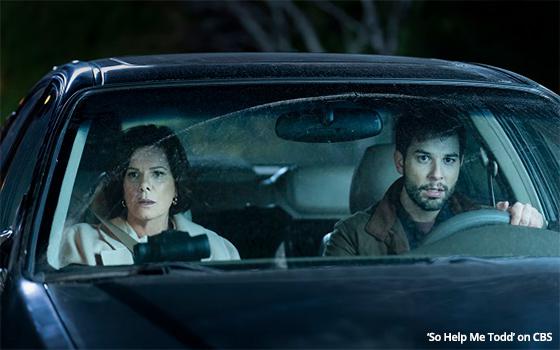 The new CBS series “So Help Me Todd” is one part drama, one part comedy, one part family-relationship show, one part detective series and one part legal drama.

That is a lot of parts to stuff into one prime-time TV show. Of all of these, the one that gets the most screen time in the series pilot airing Thursday is the family-relationship part.

This relationship -- between a mother and her full-grown son (Marcia Gay Harden and Skylar Astin, pictured above) -- is the heart of the show.

He is the Todd of the title and their relationship is one hot mess -- a point that is driven home in the pilot episode like a hammer driving a nail.

In scene after scene, the two butt heads and go toe to toe. Some of it plays like repartee that is supposed to be darkly humorous or even lighthearted, although it is difficult to be sure.

At other times, it tips clearly to the drama side. In one of these exchanges, the words come fast and furious as Todd laces into Mom for lapses in his upbringing.

Whether or not these verbal duels are supposed to be dark or light, this pilot episode has way too many of them.

Like the proverbial hammer and nail referenced above, the premiere of “So Help Me Todd” beats us over the head with these mother-son issues.

Much of the dialogue in these scenes is forced and stilted, probably because much of it was evidently written to serve as exposition.

This is a characteristic common to the pilot episodes of many network TV shows, both comedies and dramas.

They use these awkward conversations and hammy outbursts to explain what the show is about, who is related to whom, whose marriage is shaky, whose life is out of control and more.

With a show such as “So Help Me Todd,” which has so many moving parts, the exposition gets laid on thick in one single episode.

It is as if the writers and producers of this show could not wait to get all of the exposition over with as quickly as possible.

These histrionics over-complicate a show that is really very simple. The premise is this: A high-powered defense attorney hires her estranged son as an in-house detective in her law firm.

They are an oil-and-water twosome out of the “Odd Couple” mold.

You half expect a narrator to introduce the show. “Can this mother and her wayward son work together without driving each other crazy?” Cue “The Odd Couple” TV theme music.

But Mom ends up hiring Todd because he is evidently passionate about detective work and very good at it too. Although his methods are unorthodox and even vaguely illegal, he gets results.

Of the two of them, the Todd character is far more appealing than Lawyer Mom. The scenes in which Todd does his detective work are the best in the show.

One wishes there were more of these scenes and fewer scenes of Mom and Todd and their ceaseless bicker battles.

“So Help Me Todd” premieres Thursday at 9 p.m. Eastern on CBS.