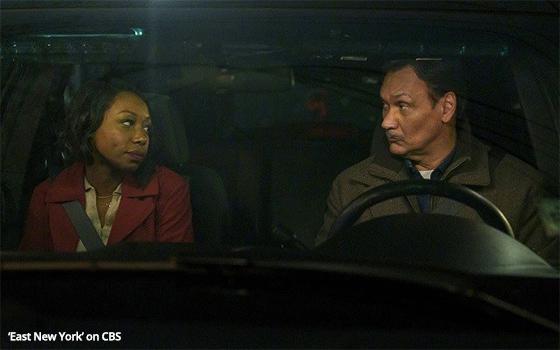 A New York-based cop show premiering Sunday night comes to prime time so fully formed that it fits as comfortably into the CBS universe as the proverbial old shoe.

That happens to be the name of this new fall show, “East New York.” By all appearances, the show is actually filmed there.

Like so many other made-in-New York cop shows -- most notably, all of the “Law & Order” shows -- the authentic locations used in “East New York” are as important to the show as its human characters.

The show opens on Haywood’s first day on the job as the newly appointed commander of the East New York precinct, where she is determined to make changes in the way the precinct’s officers interact with the community.

But first, in the show’s first scene, she has to chase a perp through the streets and over rooftops who has just shot two people to death right outside the nail salon where she just happens to be getting a manicure.

New action-drama shows often open with such a scene, which serve to introduce a show’s main character and, in the case of “East New York,” establish Deputy Inspector Haywood as courageous and determined.

Sometimes, the coincidental nature of these right-outside-the-door events can be hard to swallow. But for some reason, it doesn’t feel that way at the outset of “East New York.”

This is due mainly to Amanda Warren’s portrayal of Deputy Inspector Haywood. In the show’s pilot previewed by the TV Blog this week, her performance is as real and authentic as these things get.

If virtually all Emmys these days didn’t go to streaming services and pay cable, she should win one.

Heaven knows if “East New York” will have a run as successful as, say, CBS’s other made-in-New York cop show “Blue Bloods.” But the new one is cast in the same mold, so why not?