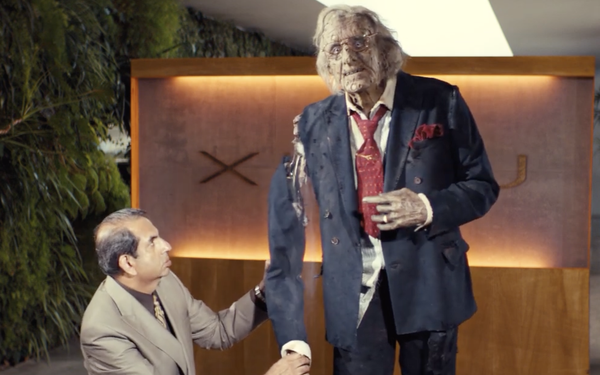 It’s not yet October, but Upwork has rolled out a Halloween-like ad featuring an “undead” boss who tells modern workers to
“make up something better” than traditional 9 to 5 office work.

The ad, via Alto, New York, starts out with executives arguing about whether to hire freelancers or full-time employees. When one exec points to a picture of “Jack,” he says that Jack would have said to hire full-timers.

Just then, an undead Jack appears with an ashen appearance and tells the execs to “Stop worrying about what I would have said.” He then adds, “I’m dead.”

After that, most execs leave the room screaming in horror. He then tells a remaining exec, Francine that the old ideas were all made up, from working 9 to 5 to working in an office.

Jack then walks through the business’s offices and says, “So, if it’s all made up, what’s to stop you from making up something better?”

Jack is then seen driving in car with two employees and Jack starts to sing. Francine then sings about hiring remote talent, “like Yiorgos in Greece.”

Jack then meets some like-minded people, who dream of building agile freelance teams.

In the end, the coworkers bury Jack on the beach and move on.