Smile, You're On Creepy Camera 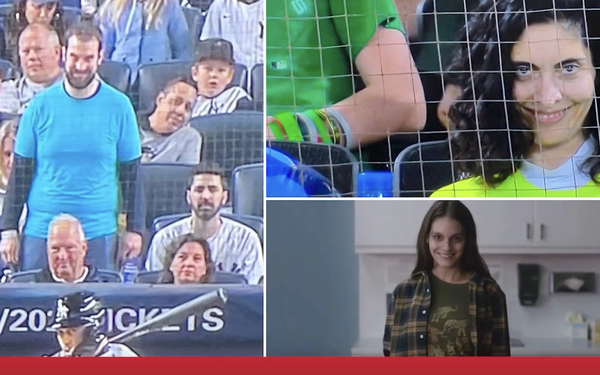 In what is likely the guerrilla marketing coup of the year, Paramount has used baseball spectators to raise awareness for the movie “Smile.”

Baseball fans are likely to have seen the promotion so far, which took place during every Major League game. In full view of cameras, there was a woman sitting in the audience behind home plate with a very creepy smile and a bright yellow T-shirt, along with a man with a blue shirt.

The promotion began last weekend during the Marlins vs. Mets game in New York on Tuesday and across MLB from New York to Oakland, California

Those eerily smiling people were of course paid actors promoting the movie, which premieres on Sept. 30.

The movie is said to be a mash-up of “The Ring” and “It Follows,” though the marketing build-up is reminiscent of that for "Paranormal Activity, "the 2007 Paramount film that was shot for $15,000 and eventually grossed more than $100 million at the box office.

Fans were split on the promotion, with one tweeting that it was “genius movie marketing,”  while other reports called it “creepy.” But at least one fan wrote that it made him want to see the movie.

Perhaps the last time a guerilla marketing effort made such a splash in Major League Baseball was in 2011, when TaylorMade, maker of golf drivers, nstalled an 88-foot-tall replica of a driver at Petco Park in San Diego, according to Creative Guerilla Marketing.