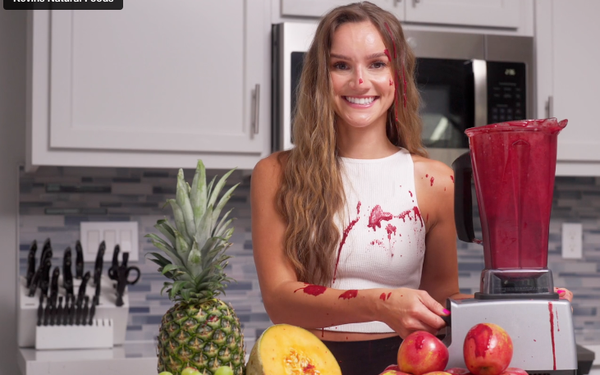 Having just launched a D2C platform for its refrigerated entrees, Kevin’s Natural Foods is looking to recruit a Chief Food Hacker.

It’s a position that will pay $10,000 and a year’s worth of the company’s meals for the person who posts the best five-minute “health hack” videos on Instagram or TikTok using #ChiefHealthHacker by Oct. 10.

Kevin McCray, who co-founded California-based Kevin’s Natural Foods in 2019, appears in this spot along with a woman whose health hack is making a burgundy smoothie in a blender without a top—only to end up wearing some of it.

“That was my acting debut,” McCray tells Marketing Daily.

The company boasts healthy ingredients used to compose precooked, "Michelin-style" meals that can be heated in five minutes.

Among the insights that guided the company’s launch was consumer research showing that while many people are aware they should be eating better, they’re too busy or aren’t good at cooking.

“We identified that it wasn’t a problem of motivation or even knowledge. It was a problem of execution,” says McCray.

Kevin’s Natural Foods recently launched an online platform despite having distribution in more than 17,000 retailers—including all Whole Foods and Costco stores.

“The category we compete in only has four to eight linear feet of space in a supermarket, so it’s impossible to get our whole line of products in all these stores,” McCray notes.

Entries for the Chief Health Hacker contest will be vetted with assistance from health influencers Denise and Katie Austin and Emmanuel Duverneau before Kevin’s Natural Foods selects three finalists.

An open public vote will determine the winner.