The Game's Definitely Afoot In The Streaming Sector 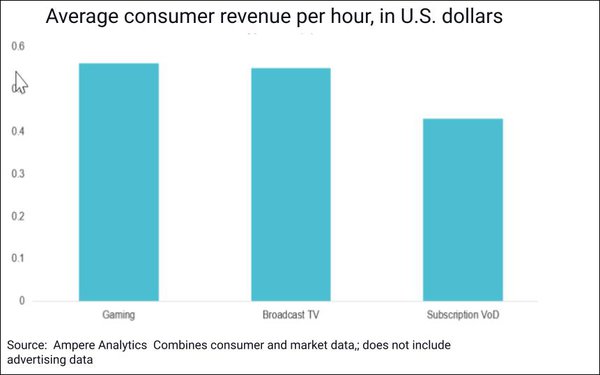 For starters, streamers are now helping to drive the growth of movies, live-action and animated TV shows and anime content inspired by video games.

Game-based originals created specifically for subscription-based video-on-demand (SVOD) streamers — which were mostly nonexistent until the past few years — have been creeping up of late. There were five in 2019, one during the pandemic-hampered production year of 2020, and seven in 2021, according to Ampere Analysis. 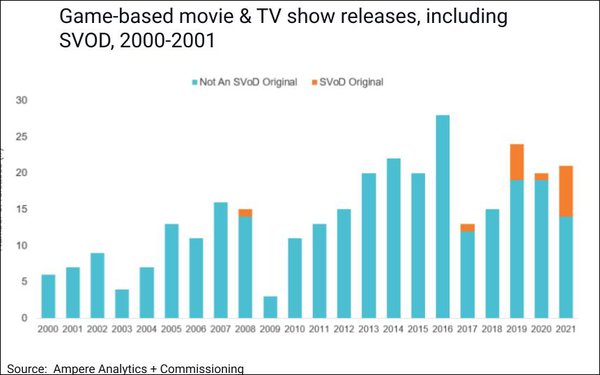 Netflix has led the trend, commissioning originals and striking  streaming rights deals for game spin-off series including “The Witcher,” “Resident Evil: Infinite Darkness” and “Arcane: League of Legends” and “Carmen Sandiego,” and movies like “Monster Hunter: Legends of the Guild,” “The Witcher: Nightmare of the Wolf” and “Arcane” (in Netflix’s top 10 for six consecutive weeks, after a theatrical run).

Others are also moving in this direction. For instance, this week,  HBO/HBO Max released a trailer for “The Last Of Us,” a game spin-off series set to debut next year.

Obviously, the objective is to use series and movies to leverage built-in game fan bases to attract significant new numbers of subscribers and enhance retention. And for streamers, it’s also an opportunity to create new, owned franchises that differentiate them from competitors in an increasingly competitive market, notes Ampere.

At the same time, Netflix and others are pushing into creating their own games.

This week saw Netflix announce that it will build its own from-scratch game development studio, in Helsinki, to complement the content specialties of the three established game studios it’s already acquired.

Netflix, which launched its game initiative in 2021, has 31 mobile games now, and has targeted 50 by year-end, including a first game based on its blockbuster original series “Stranger Things.”

But according to Apptopia, fewer than 1% of Netflix’s 221 million subscribers are engaging daily with games on the platform. Owning game studios is part of a push to ramp up gaming engagement so as to drive those streaming subs — presumably for Netflix’s coming ad-supported tier, as well as the existing no-ads plans.

To maximize their appeal, Netflix’s games are both free for subscribers and have no ads. And at least as long as increasing subscriptions to support consumer and now advertising revenue is the strategic/financial priority, it’s unlikely that Netflix will incorporate ads per se in the games.

But gamers have become more accepting of ads in free games —especially those that offer “rewards” for watching, or are playable. And knowing that Netflix was totally open to capitalizing on brand integrations in original content (such as the Eggos integrations in “Stranger Things” ) even before it abandoned its once-staunch vow against traditionally-formatted ads in its streaming content, my guess is that it may not be so long before some sort of less objectionable ad formats make their way into its games.

The metaverse is already encouraging that direction, by making it ever more possible to position brand promotions as “experiences.”

Case in point: The “Tonight Show”-themed game created by NBCUniversal to showcase the immersive capabilities of Samsung Galaxy devices, and promoted on-air by the show’s host, Jimmy Fallon.

Shoppable functions — including in-game purchases — are also undoubtedly in the strategic sights of all of the streaming players.

Another piece of recent Ampere research underlines why Netflix and media companies now staking their futures on streaming are likely to expand their business models to rely on game-based ecommerce, as well as streaming subscription fees and other types of streaming-based advertising, sponsorships and integrations.

The study found that although U.S. consumers report spending five times more time per day watching video than playing games, the per-hour revenue generated by gaming is significantly higher than revenue from SVOD subscriptions and slightly higher than advertising and other revenue realized from broadcast TV (see chart at top of page).

That’s because although many gamers play free-to-play games without spending, others monetize heavily and frequently.

Given the accelerated battle for the limited number of minutes of consumers’ attention, “the rate at which captured minutes are monetized acquires greater significance,” points out Ampere Senior Analyst Louise Shorthouse. “In terms of consumer spending, gaming offers better returns per hour, and so represents an opportunity for media groups looking at how to monetize their IP efficiently. Rather than branching out into other video formats, it is logical that platforms are considering games content — although the expertise needed to succeed is vastly different.”