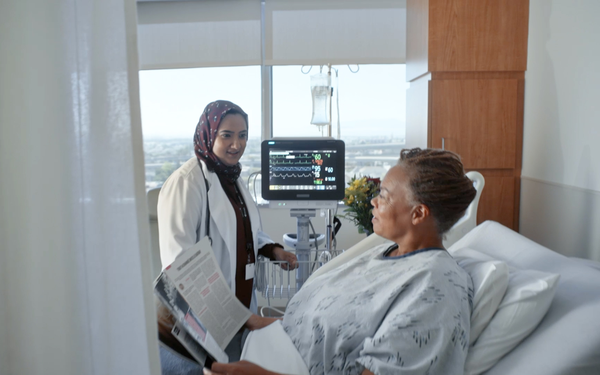 As the spot begins, the camera tracks a doctor who explains that Sutter has received 21 awards from the American Heart Association, then switches to following a nurse whom the doctor passes. He holds up a drawing to show that Sutter also receives high marks “from our best patients” and then passes by a room where a father extols “a shot to boost his immunity” and his son runs out applauding “the dinosaur stickers.”

And that’s just in the first 13 seconds of one minute and 54 seconds of clever movement and touching oral vignettes.

The idea of the campaign, Sutter says, “is to both highlight the system’s high-quality personal care and salute the hardworking employees and physicians who provide that care.”

Indeed, all the doctors, nurses and other hospital employees in the spot play themselves.

“They have an innate sense of commitment and compassion toward the people we serve, and they take such pride in the work we do,” gushed Jim Macksood, Sutter’s vice president of marketing, in a press statement.

Sutter’s creative agency Barrett turned to RSA Films’ Jake Scott to direct the audacious spot, which has also been edited into three :30 and six :15 versions. Scott, a partner in the Ridley Scott Creative Group, directed Nike’s Emmy-winning “Move” commercial a decade ago, and has also done three Super Bowl spots with Budweiser’s Clydesdales, as well as feature film and music video work.

The Sutter campaign will run through the end of the year.