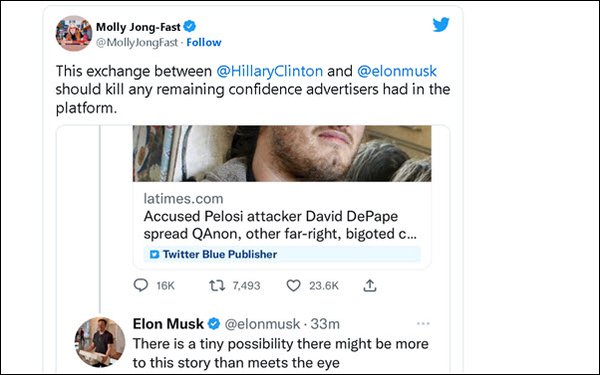 On Sunday, new Twitter owner Elon Musk confirmed the fears of many by sharing a link to a conspiracy theory about Paul Pelosi, the husband of Speaker of the House Nancy Pelosi, who last week was attacked by a right-wing conspiracy theorist.

Musk included a link to an unverified story in the Santa Monica Observer in his reply to Hillary Clinton, who had tweeted a link to a Los Angeles Times story that detailed the Qanon and conspiracy associations of David DePape, Pelosi’s alleged attacker.

The Observer previously published a conspiracy theory claiming that Clinton had died and been replaced by a body double during a debate with Donald Trump, and a story claiming that Kanye West had been given a top job in the Interior Department.

“The Republican Party and its mouthpieces now regularly spread hate and deranged conspiracy theories,” Clinton tweeted. “It is shocking, but not surprising, that violence is the result. As citizens, we must hold them accountable for their words and the actions that follow.”

Musk’s reply: “There is a tiny possibility there might be more to this story than meets the eye,” accompanied by a link to an Observer story claiming that Paul Pelosi was drunk and engaged in a dispute with a male prostitute when the attack occurred.

Musk deleted the tweet, but not before it had gone viral.

The action came just days after Musk tried to reassure Twitter advertisers, claiming that the platform would not become a “free-for-all hellscape” under his ownership.

“This exchange between Hillary Clinton and Elon Musk should kill any remaining confidence advertisers had in the platform,” tweeted (above) Molly Jong-Fast, host of the Fast Politics podcast.

“So your first big move after an attempted assassination is to tweet a homophobic and demonstrably false lie from a wholly discredited source?” echoed journalist Mark Harris. “Explain how you’re not exactly as awful as people assume you’re going to be.”

“Musk, the self-described ‘free-speech absolutist,’ is about to learn what every social media operator has learned: You have to censor people in order to run a viable social media business,” advertising industry commentator Bob Hoffman blogged last week. “There are just too many creeps and squids in the world. You can call it 'moderation' if you like, but it's really censorship. And if he doesn't practice it, as a publisher he has no hope of financial success. If he does practice it he will get heaps of scorn and derision from the fanboy community that currently adores him.

“Advertisers are more skittish than ever about ‘brand safety’ and just the smell of danger will send them running. GM has already withdrawn all its advertising from Twitter because of uncertainty about Musk -- and Musk hasn't even used the mens' room yet. But the minute Musk practices censorship, and goes against his stated principles, he will be reviled by his most zealous supporters...

“Twitter is an anomaly among the big social media companies. At one time there was a contingent of marketers who believed they ‘had to be’ on Facebook. The same is true of Instagram. The same is now true of TikTok. But no marketer has ever believed they ‘had to be’ on Twitter. This is Twitter's vulnerability. When over 90% of your income comes from advertisers, and no advertisers believe they 'have to be' there, you have a problem..."