If you truly are independent-minded, you probably wouldn't be taking advice from a narcissistic billionaire on how to vote. Or probably about much of anything else.

But I'd like to thank @elonmusk for tweeting his endorsement of Republican candidates Monday, because it sets up the most relevant "Red, White & Blog" post for today. You know, the day in which we are still allowed to vote independent of the will of those who have openly denied the process of free and fair American elections and have promised to change them if -- ironically -- they are elected.

Party politics aside, I'd like to focus on what it means to actually be independent-minded in an era when so many people are informed -- or as the case may be, misinformed -- through big digital media platforms that can easily be manipulated to, well, manipulate the way those people think, feel and vote. Or don't.

According a recent Pew Research Center study, more than half (53%) of Americans now get their news from digital media, including pure-play news sites, social media, search, podcasts, etc.

The study also found that the majority of Americans who regularly get their news from the top 11 social media platforms are Democrats or lean Democrat, while none of them had a majority of Republicans or people leaning Republican, which makes me even more of them are getting news from the long tail of dark -- how shall I say, less accountable -- sites and social media apps that have even looser guidelines for content moderation and oversight than the Big 11 do.

Interestingly, an analysis released Monday by mobile analytics firm Global Wireless Solutions found that consumption of political party-leaning news via digital devices spiked among Republicans in the period leading up to today.

The study, which is based on actual usage trends of 200,000 Americans, doesn't drill into specific sources of content, but if right-leaning news consumers aren't getting their information from the major, somewhat better lighted places (see Pew findings above), where are they getting it from?

Say what you want about Elon Musk, but at least he's 100% transparent about being a narcissistic billionaire when he makes his political endorsements. The agenda of others operating in the fringes of the dark long tail may not be so apparent.

So what am I endorsing? Well, honestly it's the first part of Musk's: being independent-minded. But to do that, you need to be an informed citizen. And the first part of being informed is understanding the credibility and authenticity of what you are leaning your mind into. 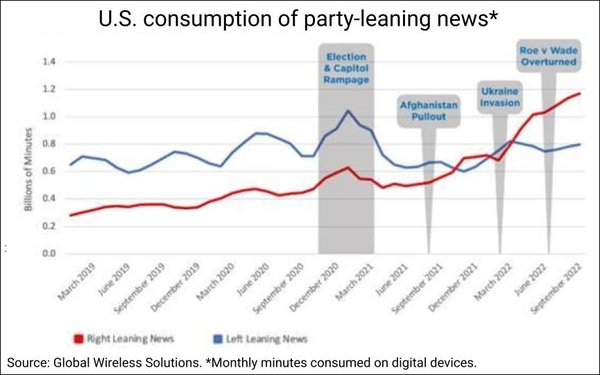 1 comment about "You've Heard Elon's, Now Here's My Endorsement".
Check to receive email when comments are posted.
Next story loading