Narration Is Endless In 'Fleishman Is In Trouble' On Hulu 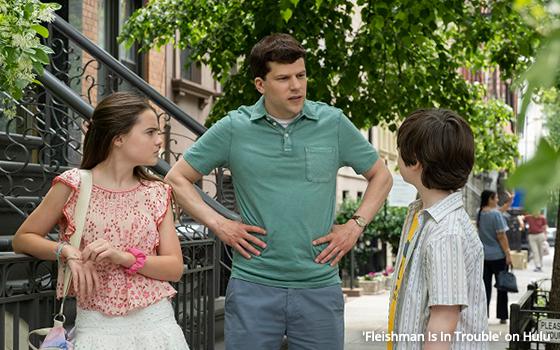 A narrator who talks (and talks and talks) for entire episodes of “Fleishman Is In Trouble” might prove troubling for some.

There are those who do not mind the kind of narration heard on this show that has been common on TV comedies and dramas for years.

Perhaps these people appreciate that a narrator is telling them the story of what they are seeing.

Others might wonder why a TV show needs a narrator to tell its story when it can already be told and reasonably understood via the media of sound, images and dialogue that are a part of every scripted TV show.

To put it bluntly, anyone who feels that narrators in scripted TV shows are distracting and unnecessary might lose patience with “Fleishman Is In Trouble” in about 15 minutes.

The TV Blog regrets sounding like a broken record on this issue (while also realizing that the metaphor of “a broken record” is lost on anyone younger than 60), but TV shows should be able to “show” what a show is about.

Whether narrated or shown, “Fleishman” tells the story of a newly divorced man -- 41-year-old Toby Fleishman (played by Jesse Eisenberg, 39) -- who works as a doctor in a Manhattan hospital.

He has two children -- a young son and a daughter on the cusp of her teenage years (both seen in the photo above with Eisenberg).

His now ex-wife Rachel (Claire Danes) is seen sparingly in the first episode of “Fleishman Is In Trouble,” but we soon learn enough to form a negative impression of her.

She is seen barreling through their New York apartment giving orders to everyone and then striding off to her job as some sort of hotshot Broadway agent.

She is driven and self-centered. As revealed many times in the series premiere, she puts herself first in all ways. While the reasons for the divorce are not exactly spelled out in the episode, it is easy to form the impression that the fault lay with her, based on the available evidence.

While she kept their nice apartment, Toby has moved into a “regular” New York City apartment. As a newly single man, he has discovered dating apps, which provide him with a steady stream of compliant, sexually charged single women.

So, what is Fleishman’s “Trouble”? For about nine-tenths of the first episode of “Fleishman Is In Trouble,” his troubles (plural) have to do with how he manages his life as a divorced man balancing work, kids and sex dates.

The real trouble comes at the end of the episode: His ex-wife suddenly goes missing. Whether this situation will have anyone advancing enthusiastically to Episode Two is a matter of personal taste.

Up to that point, the main characteristics of the show were the ceaseless narration, the whining of the characters about their First World problems and the gratuitous sex scenes. Continuing might prove challenging for some.

I believe it was just last summer that “Fleishman Is In Trouble” was being filmed on our very street and at least one street connected to it. When this happens, I always have high hopes for a TV show.

But in addition to all of the aspects of the show cited above, its writers evidently take a very dim view of the Upper East Side neighborhood of Manhattan where the show takes place.

The area’s residents are depicted as obnoxious richies, when much of the area is composed of decidedly middle-class Manhattanites.

The show even takes a somewhat vicious swipe for no apparent reason at one of the area’s best-known -- and by all appearances, best-liked -- local institutions, the venerable Jewish YMHA known today as the 92nd Street Y.

The whole depiction of this part of New York City has me wondering: What did the Upper East Side and the 92nd Street Y ever do to the writers and producers of “Fleishman Is In Trouble” that they should position the neighborhood this way?

“Fleishman Is In Trouble” starts streaming on Thursday (November 17) on Hulu.