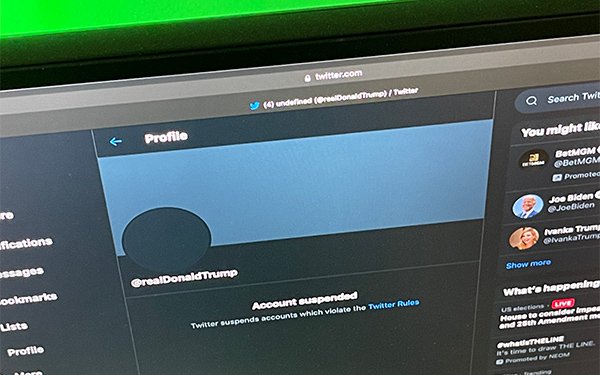 Former President Donald Trump on Monday is asking a federal appellate court to revive his lawsuit claiming that Twitter violated the 1st Amendment by banning him from the platform.

A federal district court judge threw out the lawsuit in May, ruling that the 1st Amendment prohibits the government -- but not private companies like Twitter -- from engaging in censorship.

Trump is now asking the 9th Circuit Court of Appeals to reverse that ruling, arguing that Twitter was effectively acting as an arm of the government when it banned him from the platform.

“Powerful Democratic legislators threatened to use their official authority to impose Draconian legal consequences against defendants and other social media companies if they did not censor disfavored speakers and speech,” Trump's lawyers contend in papers filed Monday with the appellate court.

The new papers come in a lawsuit filed last year against Twitter by Trump over his account ban following the January 6, 2021 riot at the Capitol. He sought a court order requiring Twitter to reinstate him.

Attorneys for the former president pointed in their legal papers to several examples of elected officials either calling for Trump to be banned from social media, or calling for changes to Section 230 of the Communications Decency Act -- the law that protects platforms from liability over users' speech.

For instance, Trump's lawyers point to a statement made by Vice President Kamala Harris in October of 2019 (when she was still a Senator), calling for Trump's Twitter account to be suspended, and to Rep. Nancy Pelosi (D-California)'s warning that tech companies' legal protections could be in jeopardy, unless they acted with more “responsibility.”

Trump's lawyers are now arguing to the 9th Circuit that those statements and other similar ones effectively coerced Twitter to suppress Trump's posts.

U.S. District Court Judge James Donato rejected that argument in May, when he dismissed Trump's complaint.

“Legislators are perfectly free to express opinions without being deemed the official voice of 'the State.'” the judge wrote. “Government in our republic of elected representatives would be impossible otherwise.”

Twitter is expected to respond to Trump's argument next month.

Trump was also banned by Facebook and YouTube after January 6, and sued those companies as well. Those matters are currently stayed, pending an appellate ruling in the lawsuit against Twitter.