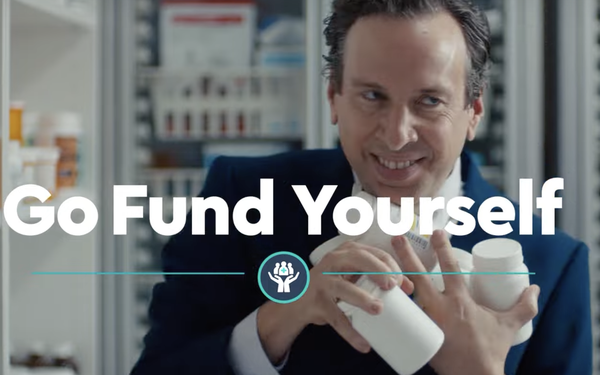 Fed up with the healthcare system? You’re not alone.

In a 96-second video for Nomi Health, a smirking man wonders through a hospital stealing medication and saying such inappropriate things as “It smells weird in here” and “Co-pay on a colonoscopy? Bend over and go fund yourself where the sun don’t shine.”

Through the entire spot, "GoFundYourselfAmerica.com” appears on screen, and at the end, “It’s Your Healthcare, You Should Pay For It.”

Visit the site, though, and after an initial repeat of this cynical messaging, you get another side: “At Nomi Health, we’’ll never tell you to go fund yourself….We’re rebuilding healthcare so everyone can easily access affordable, quality care.”

Then visitors are provided a template to tell their own sad healthcare stories, with Nomi promising to donate $100 per each story (up to $100,000) to help cover the medical costs of the underinsured.

The concept is a reaction to what Sean McBride, chief creative officer of Arnold, calls "the massive spike in crowdfunding as a way to pay for healthcare in the U.S.”

“To me the idea is a call to arms to rethink the healthcare system as a whole,” McBride tells Marketing Daily. “And the truth behind the idea -- that crowdsourced fund-raising has become a fundamental and widely accepted way for regular people to pay medical bills -- is a sad reality that should ring true for the healthcare industry and consumers alike.”

The campaign, which ran through Nov. 20, was launched Nov. 7, and has targeted the healthcare industry with Arnold-created out-of-home (with locales including the airport) in Las Vegas where the HLTH conference just took place. The video is being shared via Nomi Health’s social media channels.

Arnold says it plans to do a broader campaign buy in the coming months, with a twofold focus: compelling government to reform or change laws to improve access to health care; and “prompting” employers, governments, and providers to utilize Nomi’s technologies and services to lower costs -- 30%, Nomi says -- by removing unnecessary administration and providing actionable insights through analytics.

Nomi Health describes itself as a “direct healthcare service provider” with customers including “government, the self-insured, employers, providers, brokers/consultants and patients.”

The company said it provided testing and treatment to some 15 million Americans in more than 15 states during the first two years of the COVID pandemic -- thus creating a “third lane of direct care to patients, an entirely new ecosystem outside of the traditional public/private healthcare system."

Actually, much of Nomi Health’s business is directed at improving operating and payment systems for third parties like employers, governments, and healthcare providers.