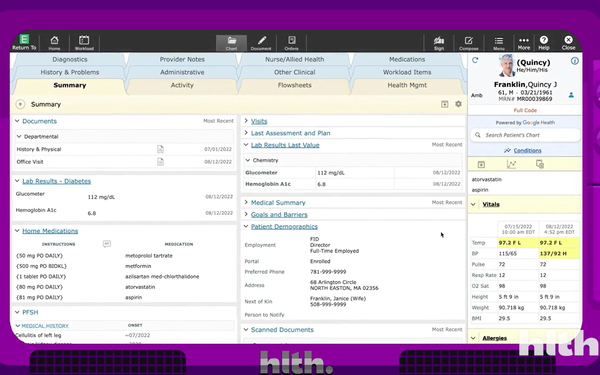 Tech giants were busy on the health front last week, with Amazon launching Amazon Clinic for consumers and Google making announcements about a new Fitbit partnership and pilots of its Care Studio for clinicians.

Amazon Clinic, available in 32 states, provides personalized treatment plans -- which could include prescriptions -- from licensed clinicians for 18 common conditions ranging from acne to yeast infections. The service uses online questionnaires and messages rather than video calls or chats.

Amazon's chief medical officer Nworah Ayogo, who was named general manager of the new Clinic, spoke at the HLTH conference in Las Vegas on the day of the service’s launch, telling the audience that Amazon’s normal emphasis on “convenience, value and selection” would apply to the new business.

Aaron Martin, Amazon’s vice president of healthcare, emphasized that, as with much of Amazon’s businesses, the tech company will mainly serve to connect buyers and sellers: “It’s becoming harder and harder for traditional healthcare companies to even communicate with their own customers….We’re making those  connections, increasing that engagement.”

“Clinicians often struggle to find information they need,” said Paul Muret, vice president of Care Studios at Google Health.  “Care Studio pulls together fragmented records from across systems into a single harmonized, longtitudinal view of patients -- and on top of that, we add a deep search and summarization capability.”

Another Google company at HLTH was Fitbit.

Babylon Health will provide Fitbits to select higher-risk patients with chronic conditions, with data from the devices (such as activity levels and sleep patterns) also available to patients’ care teams.

McDonough also mentioned a Fitbit project with Bristol-Myers Squibb and Pfizer aimed at early detection of atrial fibrillation.  She revealed that Fitbit's UnitedHealthCare Motion collaboration, which is now at least six years old, has so far resulted in UHC members walking a collective 862 billion steps -- and earning $105 million in rewards for their efforts.

That’s according to Hadas Bitran, partner group manager for Health AI at Microsoft Health and Life Sciences, who told a HLTH audience that by “powering self-assessment of symptoms,  triaging patients an putting info in the hands of  the user so they can be more independent,” the product had helped “alleviate the burden and the overload from the healthcare system itself.”