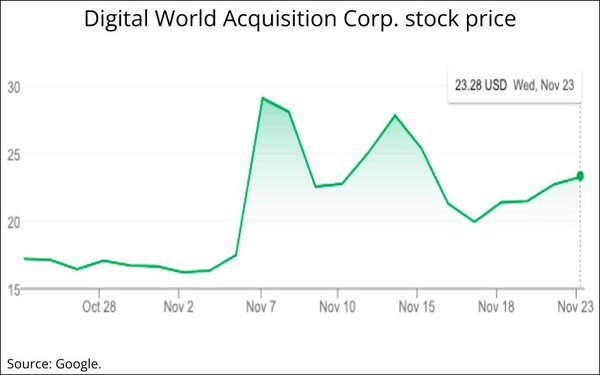 Since Elon Musk announced that former President Donald Trump would be allowed to resume his Twitter account, Digital World Acquisition Corp. -- the “blank check” company that intends to merge Trump's media company, which owns Truth Social -- has seen a 15% increase in its stock over the past five days.

Other news that boosted the stock came on Tuesday: DWAC shareholders extended the deadline to merge their company with Trump's media company -- Trump Media & Technology Group, which owns Truth Social.

A week ago, Trump announced he would enter the presidential race for 2024. CNN said in Trump's announcement he made 20 false and misleading claims.

Musk decided to end the suspension of Trump's Twitter account this past weekend after announcing the results of a Twitter poll in favor of returning Trump to the site. Trump has said he has no interest in returning to Twitter. Trump had 88 million followers on Twitter, and has around 4.5 million on Truth Social.

When DWAC -- a (SPAC) a special purpose acquisition company -- began selling stock over a year ago with the purpose of merging with Trump's company, its share price quickly rose to over $100. But for many months since then, it has languished at around $15 to $17 a share.

SPACs are non-operating publicly listed companies whose purpose is to identify and purchase a private company, allowing the acquisition target to have publicly listed stock. Analysts call them a “blank check” company.

Since Musk closed his deal to buy Twitter for $44 billion and take it private -- promising freedom of speech for everyone -- he has made massive staffing cutbacks, eliminating around half of the company’s 7,500-plus employees, according to reports.

This includes many staffers on Twitter's trust and safety team, as well as Yoal Roth, the former global head of trust & safety at Twitter.

Since Musk’s takeover, around one third of Twitter’s top 100 advertisers have departed, according to reports.