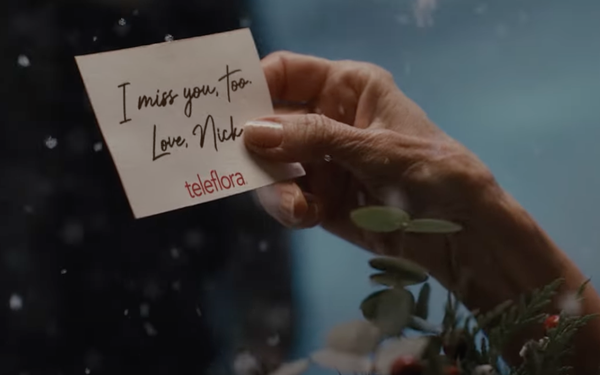 The holidays are a lonely slog for many people, but Teleflora's new holiday campaign taps an unlikely poster girl. It’s Mrs. Claus, stuck at home while Nick is out working.

It’s easy to think the spot, themed “Leave No One Out This Holiday,” is about a recent widow. There’s an empty rocking chair, an extra toothbrush, and a sympathetic husky who looks lonely, too, all while the snow falls around the little cottage.

Then a parka-wearing deliverywoman comes to the door, bearing flowers and a note from Nick, and the picture becomes clear. Santa’s a great guy, but his work means empty holidays for his wife.

Teleflora, owned by the Wonderful Company, created the campaign in-house. It hopes to inspire people to think about anyone who might be lonely this year.

“Her husband’s working night and day, leaving every Christmas Eve on a long and intense journey. The intent was to show this very relatable person, giving subtle hints throughout that the woman was Mrs. Claus before the final reveal.”

She says that Mr. and Mrs. Claus typically get painted as “joyous humanitarians.” Instead, this shows a more human side. “Ultimately, the goal is to remind everyone to reach out to your loved ones this season, even to the most unassuming, and show that you haven’t forgotten them.”

The spot, filmed on location in Poland, is the latest in the company’s ongoing “Love Out Loud” campaign platform, which has been running since 2017.

Danielle Mason, Teleflora’s vice president of marketing, tells Marketing Daily a 30-second and 60-minute spot are scheduled to run on YouTube, Facebook and Instagram. There are also targeted in-stream media buys on connected TV, digital and mobile. Additionally, the company will use organic social teasers showing various portions of the spot in Instagram and Facebook stories.

It's also planning an integration with the TV show "The View,"  with snippets of the spot running “while highlighting personal stories from the show’s anchors.”

That integration will also be shared in social channels to increase engagement.

The brand is also hoping to keep the people of Ukraine top-of-mind this holiday. It’s partnering with the Ridna Shkola of Los Angeles, the Ukrainian Saturday School, to host a pop-up at the Ukrainian Culture Center.