Amazon Surpasses Netflix To Become #1 In U.S. Subs, According To New Ranking 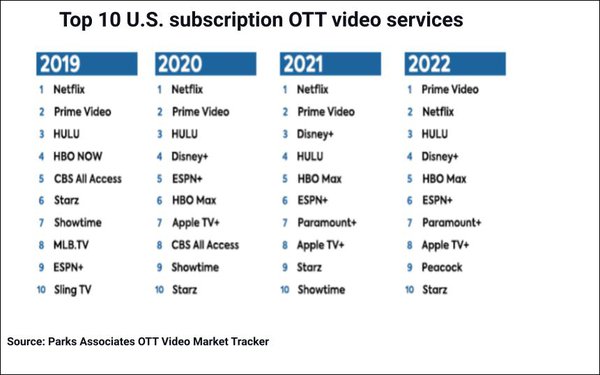 Amazon Prime Video has surpassed longtime leader Netflix in total number of U.S. subscribers, according to a new ranking released by Parks Associates.

The research firm’s rankings are based on estimated numbers of subscribers through September 2022 from the firm’s OTT Video Market Tracker.

Parks did not disclose the actual estimated numbers, although it said it would provide more specifics at an upcoming conference.

Hulu jumped over Disney+ to gain the #3 position, Peacock entered the top 10 at #9, and Showtime (previously #10) dropped off the list.

Amazon Prime Video is included as part of Amazon's aggressively marketed Prime membership. Netflix has been struggling to grow in the U.S., its largest and most saturated market.

Parks Vice President Research Jennifer Kent noted that there is significant disruption in the marketplace as streaming services introduce new content, services and partnerships, adding that it Netflix is positioning for a possible resurgence in subscribers.

“Netflix’s ad-supported plan gives the company a way to win back subscribers who left over high subscription prices,” she stated. “It also gives Netflix a path to creating unique accounts for those who have been content to share passwords with friends and family in the past. It’s an exciting time to track these services, with lots of disruption and change.”

Parks also reports that the tracker now shows 83% of broadband households having at least one OTT service, and 23% having  nine or more.