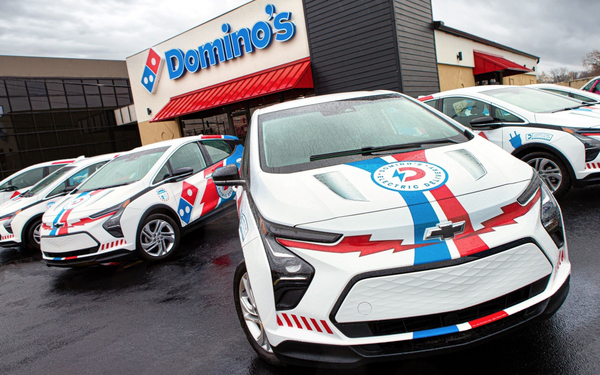 Eventually, the delivery fleet will include more than 800 EVs. Customers can check an interactive website to see which locations near them have begun using the earth-friendly vehicles.

Domino's is launching two giveaways, giving customers the chance to win one of two 2023 Chevrolet Bolt EVs. Consumers who order Domino's delivery online between now and Feb. 12 will automatically be entered for a chance to win.

The Ann Arbor, Michigan-based pizza company has made a commitment to be net-zero carbon emissions by 2050, says Russell Weiner, Domino's chief executive officer.

Domino’s was one of the first to launch pizza delivery in 1960 with a Volkswagen Beetle. In 2015, the company rolled out the DXP – a custom-built pizza delivery vehicle, and later tested autonomous pizza delivery with cars and robots.

"Domino's has always been on the cutting edge of pizza delivery, and electric delivery cars make sense as vehicle technology continues to evolve,” Weiner says in a release.

The Chevrolet Bolt’s affordable price and 259-mile range make it a good choice for a delivery vehicle, Peper says.