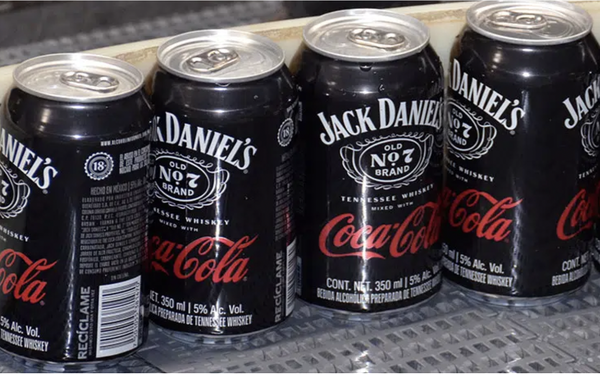 The worst tipping point would be if one cannibalizes the other—but so far Brown-Forman executives say they’re not concerned.

A few weeks ago, Jack & Coke launched in Mexico, and plans call for its debut in the United States, United Kingdom and select European, Asian and Latin America markets in the first half of 2023.

Before partnering with Coca-Cola in June, Brown-Forman had been selling its own version of Jack and Cola.

On Jan. 1, Jack Daniel’s begins a multiyear partnership with McLaren Racing’s Formula 1 team aimed at expanding awareness of the whiskey brand in the United States and around the world.

In the walkup to the Coke and Formula 1 ventures, Brown-Forman’s sales have continued strong across its portfolio.

In the first half of fiscal 2023 ended Oct. 1, premium brand Woodford Reserve grew net sales by 39% while Brown-Forman’s RTD offerings increased 14% and Jack Daniel’s whiskey by 9%.

“We believe RTD cocktails address a distinct consumer occasion and based on our results we’ve not seen the growth of our RTD cocktails result in a decrease in our full- strength products,” Brown-Forman president and CEO Lawson Whiting said today on an earnings call with financial analysts.

“In fact, we’ve experienced growth of both our full strength and RTD products side by side.”

In the United States, “Spirits-based RTD’s are flying—driven by a few very big brands—and we hope to join those ranks over the next year.”

Senior vice president and CFO Leanne Cunningham hinted about the possibility that at some point, the company might “premiumize” Jack & Coke.

In its Formula 1 endeavor across multiple continents, Jack Daniel’s branding will be featured on the nose of McLaren’s cars as well as on drivers’ overalls and pit crew helmets.

According to Whiting, appeal for Formula 1 is growing at the fastest rate of any major global sport—with more than one billion fans.

“The majority of the sport’s growth comes from the next generation of fans—providing a powerful opportunity to reach new consumers of legal drinking age and expand Jack Daniel’s relevance in pop culture.”