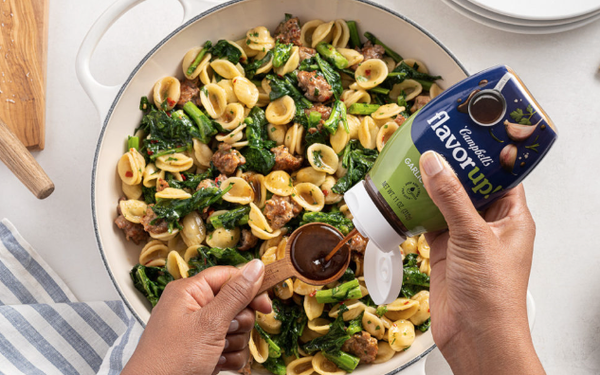 A continuation of pandemic-induced at-home cooking is helping to offset food inflation in retail categories like soups and sauces.

The bottom line for Campbell Soup Co. was a 15% increase in organic sales in the quarter ended Oct. 30.

“Our consumer insights show that consumers continue to cut back on out-of-home eating and are migrating from more expensive grocery categories as they seek ways to ease the impact of inflation,” president and CEO Mark Clouse said yesterday in explaining the company’s Q1 (of its fiscal 2023( results.

It was the fifth consecutive quarter of level or increased dollar share for the Chunky soup line.

Examples of the latter include the brand’s National Football League sponsorship and Chunky’s “Lunchtime Is Your Halftime” campaign—which is aimed at encouraging people to stop skipping lunch—along with sponsorship of the digital EA Sports Madden Championship Series.

In addition to positioning Chunky as soup that “eats like a meal,” Campbell has ramped up efforts to promote its soups as ingredients in side dishes—as seen in this “Happy Sides Season” commercial.

Even as the company’s Prego Italian and Pace Mexican sauces outpaced their categories in the 13 weeks ended Oct. 30, Campbell is looking to increase its sauce offerings.

The company has previously stated its intention to acquire other sauce brands or develop new ones.

Asked about it yesterday, Clouse said that Campbell will do “either small, tuck-in acquisitions” or develop new sauce products internally.

He also mentioned pursuing opportunities in “adjacent segments,” such the recent launch of FlavorUp—which is a flavor concentrate that comes in squeeze bottles.